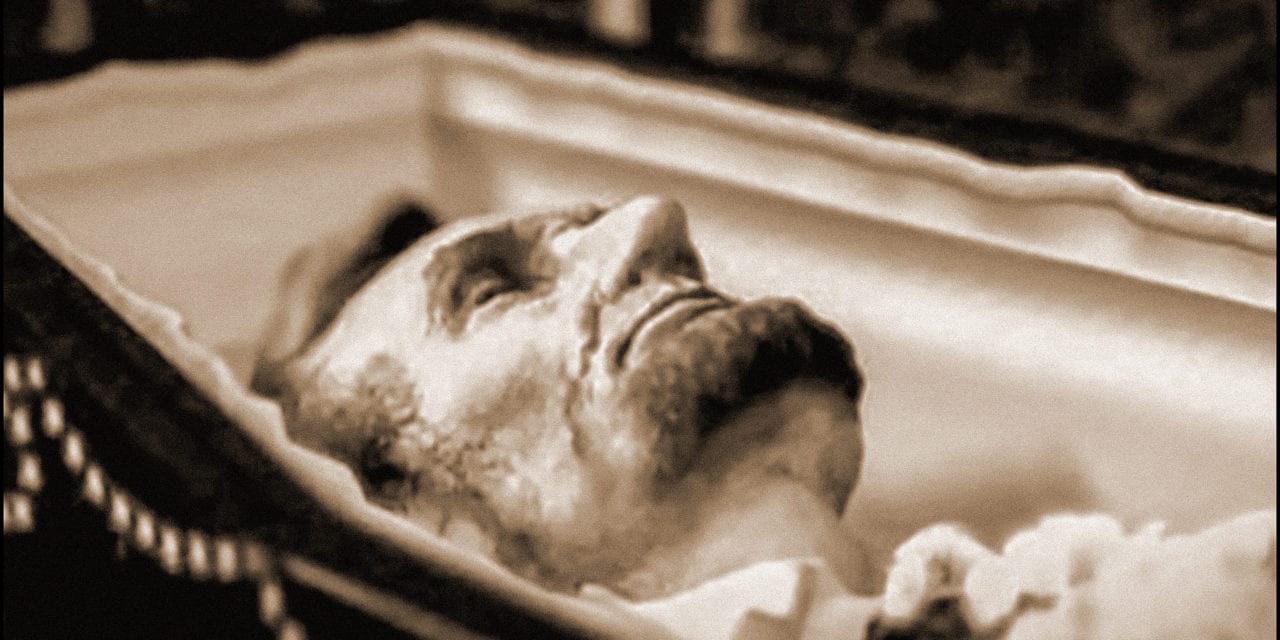 Many people know that some of Walt Whitman’s most popular works, “O Captain, My Captain”  and “When Lilacs Last in the Dooryard Bloom’d”, were written in tribute to Abraham Lincoln. What many don’t know is that Whitman was in Ford’s Theatre on the night of Lincoln’s assassination, and wrote what is considered to be the most detailed account of the night’s events, first published in Frank Leslie’s “The American Magazine”, January 1876, pp 370 and later printed in Walt Whitman’s book, Two Rivulets, an accompaniment to Leaves of Grass.

Here we present the full text from the first publishing of Walt Whitman’s account, transcribed from “The American Magazine”. Headings have been added to aid readability.

“The day, April 14, 1865, seems to have been a pleasant one throughout the whole land – the moral atmosphere pleasant, too – the long storm, so dark, so fratricidal, full of blood and doubt and gloom, over and ended at last by the sunrise of such an absolute national victory, and utter breaking down of secessionism – we almost doubted our own senses! Lee had capitulated beneath the apple-tree of Appomattox. The other armies, the flanges of the revolt, swiftly followed.

And could it really be, then? Out of all the affairs of this world of woe and passion, of failure and disorder and dismay, was there really come the confirmed, unerring sign of plan, like a shaft of pure light – of rightful rule – of God?

But I must not dwell on accessories. The deed hastens. The popular afternoon paper, the little Evening Star, had spattered all over its third page, divided among its advertisements in a sensational manner in a hundred different places, “The President and his lady will be at the theatre this evening.”

(Lincoln was fond of the theatre. I have myself seen him there several times. I remember thinking how funny it was that he, in some respects, the leading actor in the greatest and stormiest drama known to real history’s stage through centuries, should sit there and be so completely interested and absorbed in those human jack-straws, moving about with their silly little gestures, foreign spirit, and flatulent text.)

So the day, as I say, was propitious. Early herbage, early flowers, were out. (I remember where I was stopping at the time, the season being advanced, there were many lilacs in full bloom. By one of those caprices that enter and give tinge to events without being at all a part of them, I find myself always reminded of the great tragedy of that day by the sight and odor of those blossoms. It never fails.)

On this occasion the theatre was crowded, many ladies in rich and gay costumes, officers in their uniforms, many well-known citizens, young folks, the usual clusters of gaslights, the usual magnetism of so many people, cheerful, with perfumes, music of violins and flutes – (and over all, and saturating all, that vast vague wonder, Victory, the Nation’s Victory, the triumph of the Union, filling the air, the thought, the sense, with exhilaration more than all perfumes.)

The President came betimes, and, with his wife, witnessed the play, from the large stage-boxes of the second tier, two thrown into one, and profusely draped with the national flag.

The nets and scenes of the piece – one of those singularly witless compositions which have at least the merit of giving entire relief to an audience engaged in mental action or business excitements and cares during the day, as it makes not the slightest call on either the moral, emotional, aesthetic, or spiritual nature – a piece (“Our American Cousin”) in which, among other characters, so called, a Yankee certainly such a one was never seen, or the least like it ever seen in North America, is introduced in England, with a varied fol-de-rol of talk, plot, scenery, and such phantasmagoria as goes to make up a modern popular drama – had progressed through perhaps a couple of its acts, when in the midst of this comedy, or tragedy, or nonsuch, or whatever it is to be called, and to offset it or finish it out, as if in nature’s and the great muse’s mockery of these poor mimes comes interpolated that scene, not really or exactly to be described at all (for on the many hundreds who were there it seems to this hour to have left little but a passing blur, a dream, a blotch) – and yet partially to be described, as I now proceed to give it.

There is a scene in the play representing a modern parlor, in which two unprecedented English ladies are informed by the unprecedented and impossible Yankee that he is not a man of fortune, and therefore undesirable for marriage-catching purposes; after which, the comments being finished, the dramatic trio make their exit, leaving the stage clear for a moment.

There was a pause – a hush as it were. At this period came the murder of Abraham Lincoln! Great as that was, with all its manifold train circling round it, and stretching into the future for many a century, in the politics, history, art, etc., of the New World, in point of fact the main thing, the actual murder, transpired with the quiet and simplicity of any commonest occurrence – the bursting of a bull or pod in the growth of vegetation, for instance.

Through the general hum following the stage pause, with the change of positions, etc., came the muffled sound of a pistol shot, which not one hundredth part of the audience heard at the time – and yet a moment’s hush – somehow, surely a vague, started thrill – and then, through the ornamented, draperied, starred and striped space-way of the President’s box, a sudden figure, a man raises himself with hands and feet, stands a moment on the railing, leaps below to the stage (a distance of perhaps fourteen or fifteen feet), falls out of position, catching his boot-hell in the copious drapery (the American flag), falls on one knee, quickly recovers himself, rises as if nothing had happened (he really sprains his ankle, but unfelt then) – and so the figure, Booth the murderer, dressed in plain black broadcloth, bare-headed, with a full head of glossy, raven hair, and his eyes, like some mad animal’s, flashing with light and resolution, yet with a certain strange calmness, holds aloft in one hand a large knife – walks along not much back from the footlights – turns fully toward the audience his face of statuesque beauty, lit by those basilisk eyes, flashing with desperation, perhaps insanity – launches out in a firm and steady voice the words, Sic semper tyrannis – and then walks with neither slow nor very rapid pace diagonally across to the back of the stage, and disappears.

(Had not all this terrible scene-making the mimic ones preposterous – had it not all been rehearsed, in blank, by Booth, beforehand?)

A moment’s hush, incredulous – a scream – the cry of murder – Mrs. Lincoln leaning out of the box, with ashy cheeks and lips, with involuntary cry, pointing to the retreating figures, “He has killed the President!” And still a moment’s strange, incredulous suspense – and then the deluge! – then that mixture of horror, noises, uncertainty – (the sound, somewhere back, of a horse’s hoofs clattering with speed) – the people burst through chairs and railings, and break them up – that noise adds to the queerness of the scene – there is inextricable confusion and terror – women faint – quite feeble persons fall, and are trampled on – many cries of agony are heard – the broad stage suddenly fills to suffocation with a dense and motley crowd, like some horrible carnival – the audience rush generally upon it – at least the strong men do – the actors and actresses are all there in their play costumes and painted faces, with moral fright showing through their rouge – some trembling – some in tears – the screams and calls, confused talk – redoubled, trebled – two or three manage to pass up water from the stage to the President’s box – others try to clamber up – etc., etc., etc.

The President’s Guard Bursts In

In the midst of all this, the soldiers of the President’s Guard, with others, suddenly drawn to the scene, burst in – some two hundred altogether – they storm the house, through all the tiers, especially the upper ones, inflamed with fury, literally charging the audience with fixed bayonets, muskets, and pistols, shouting, “Clear out! clear out! – you sons of bitches!” Such the wild scene, or a suggestion of it rather, inside the play-house that night.

Outside, too, in the atmosphere if shock and craze, crowds of people, filled with frenzy, ready to seize any outlet for it, came near committing murder several times on innocent individuals. one such case was especially exciting. The infuriated crowd, through some chance, got started against one man, either for words he uttered, or perhaps without any cause at all, and were proceeding at once to actually hang him on a neighboring lamp-post, when he was rescued by a few heroic policemen, who placed him in their midst and fought their way slowly, and amid great peril, toward the station-house.

It was a fitting episode of the whole affair. The crowd rushing and eddying to and fro – the night, the yells, the pale faces, many frightened people trying in vain to extricate themselves – the attacked man, not yet freed from the jaws of death, looking like a corpse – the silent, resolute half-dozen policemen, with no weapons but their little clubs, yet stern and steady through all those eddying swarms – made, indeed, a fitting side-scene to the grand tragedy of the murder. They gained the station-house with the protected man, whom they placed in security for the night, and discharged in the morning.

And in the midst of that night pandemonium of senseless hate, infuriated soldiers, the audience, and the crowd – the stage, and all its actors, actresses, its paint pots, spangles, and gas-lights – the life-blood from those veins, the best and sweetest of the land, drips slowly down, and death’s ooze already begins its little bubbles on the lips.”

Such, hurriedly sketched, were the accompaniments of the death of President Lincoln. So suddenly, and in murder and horror unsurpassed, he was taken from us. But his death was painless. 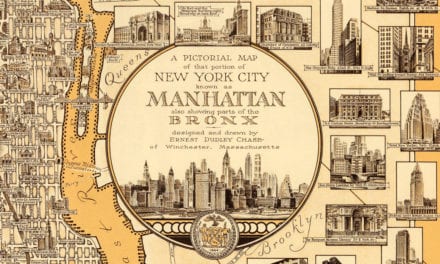 Amazing old map of Manhattan from 1939 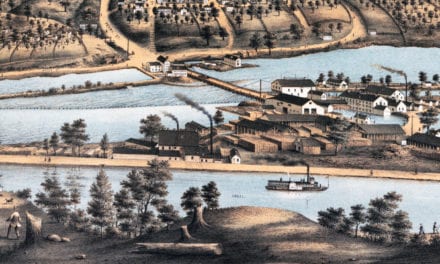 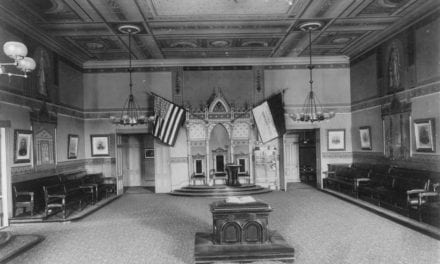