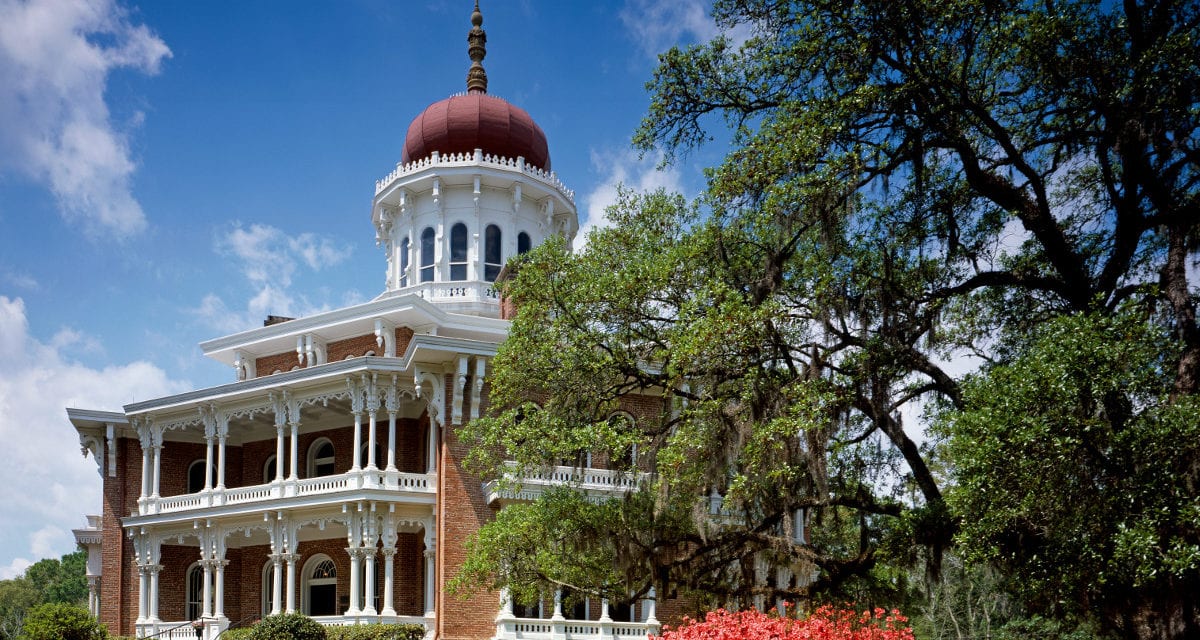 Longwood, also known as Nutt’s folly, is a grand antebellum mansion in Natchez, Mississippi. The house was built and designed by Philadelphia architect Samuel Sloan for Haller Nutt, a successful cotton planter and plantation owner in Mississippi who made his fortune when he developed a commercial strain of cotton popular in the Deep South. 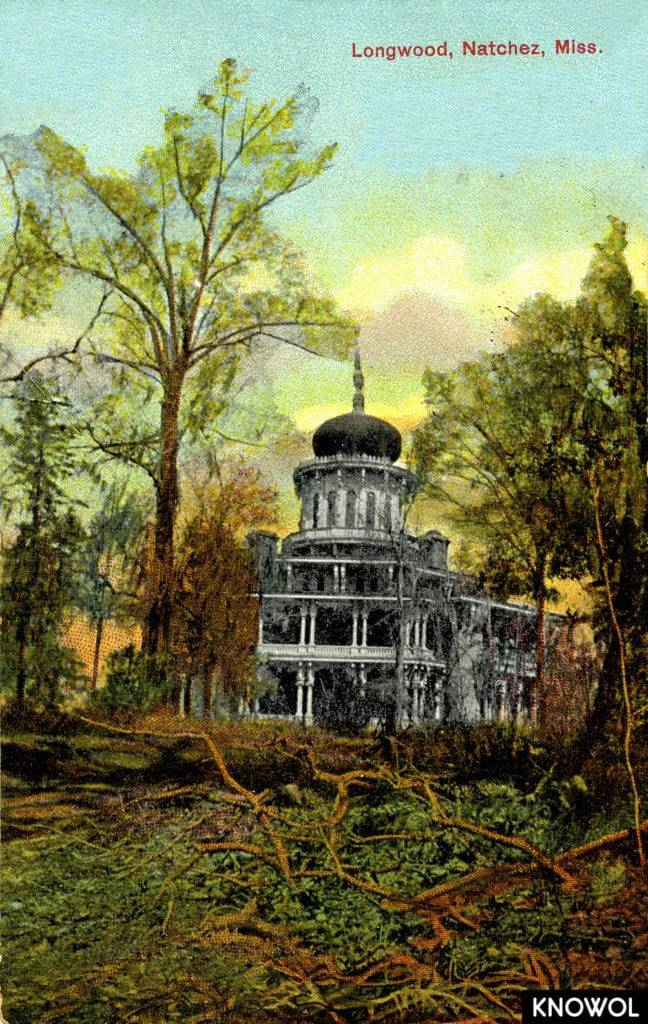 “Longwood” was one of the wealthiest estates in Mississippi. Construction of the grand, antebellum mansion began in 1860, and was to be four stories, with a basement, and an octagon hall with a dome that reached a hundred feet high, surmounted by a cupola taller than any church spire in Philadelphia up until the year 1960. 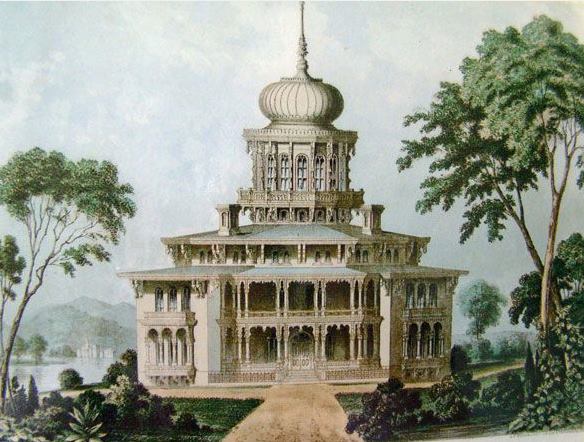 This image shows the original conceptualization of Longwood. A superb view of the country, the winding, sluggish river and the boundaries of Louisiana spread out for miles below “Longwood.”

Longwood is one of the finest surviving examples of the Oriental Revival style, and an exemplary illustration of an exotic phase of architectural romanticism that flourished in mid-19th century America. 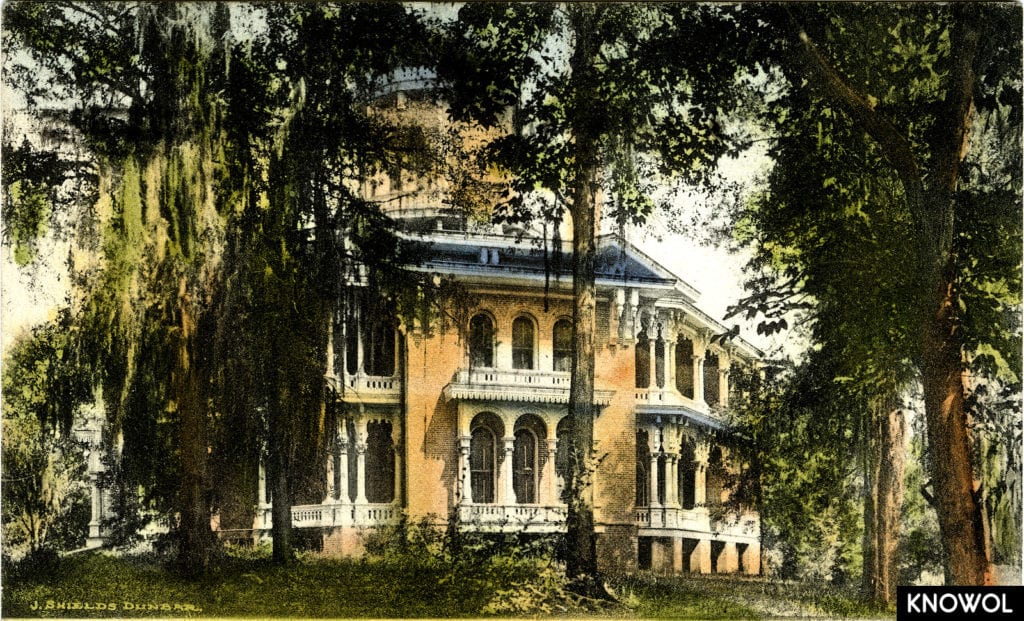 Longwood sat on eighty acres, with sixty servants, and had a garden with five hundred varieties of roses. In April of 1861, news of the Civil War reached Natchez and the Philadelphia artisans who were working on the house dropped their tools and returned north to join the Union forces. The tools and paint buckets left behind by the workmen remain in the mansion today, unmoved for more than 150 years. Construction was never finished. 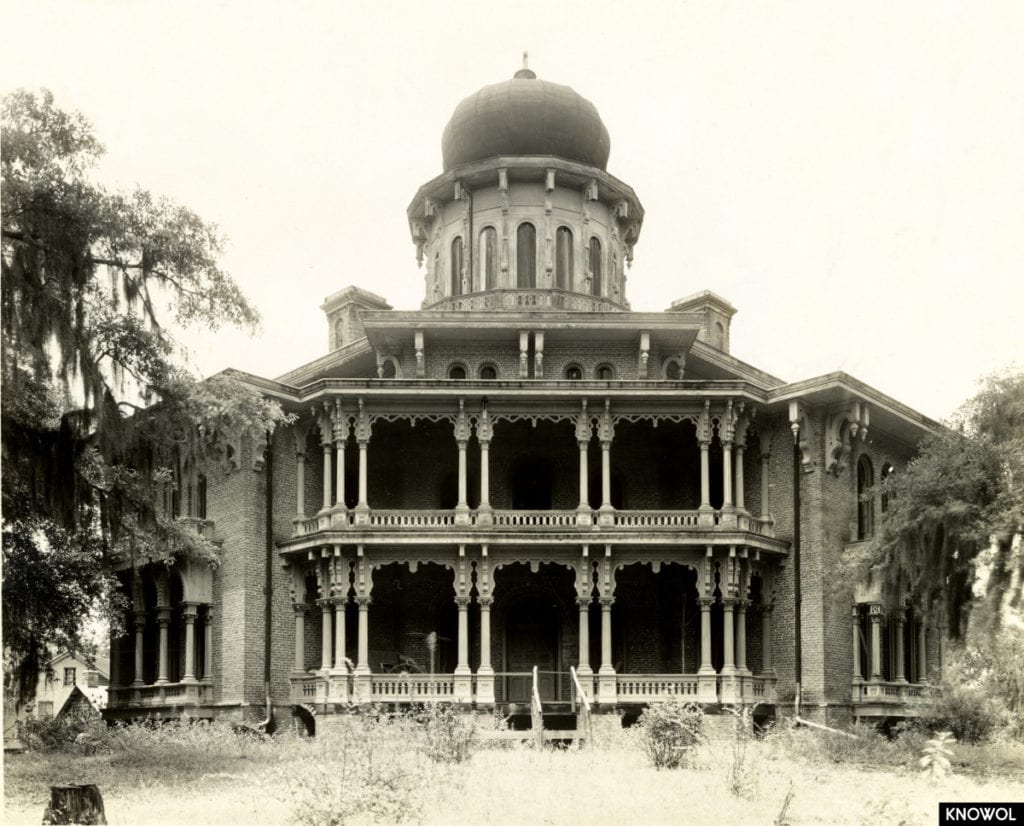 When completed, the house was supposed to have 32 rooms, 26 fireplaces, 115 doors, 96 columns and a total of 30,000 square feet of living space, but only nine of the 32 rooms were finished. Look up to see what would have been bedroom suites, storage, and an observatory from which one could see all the way to the Mississippi River. 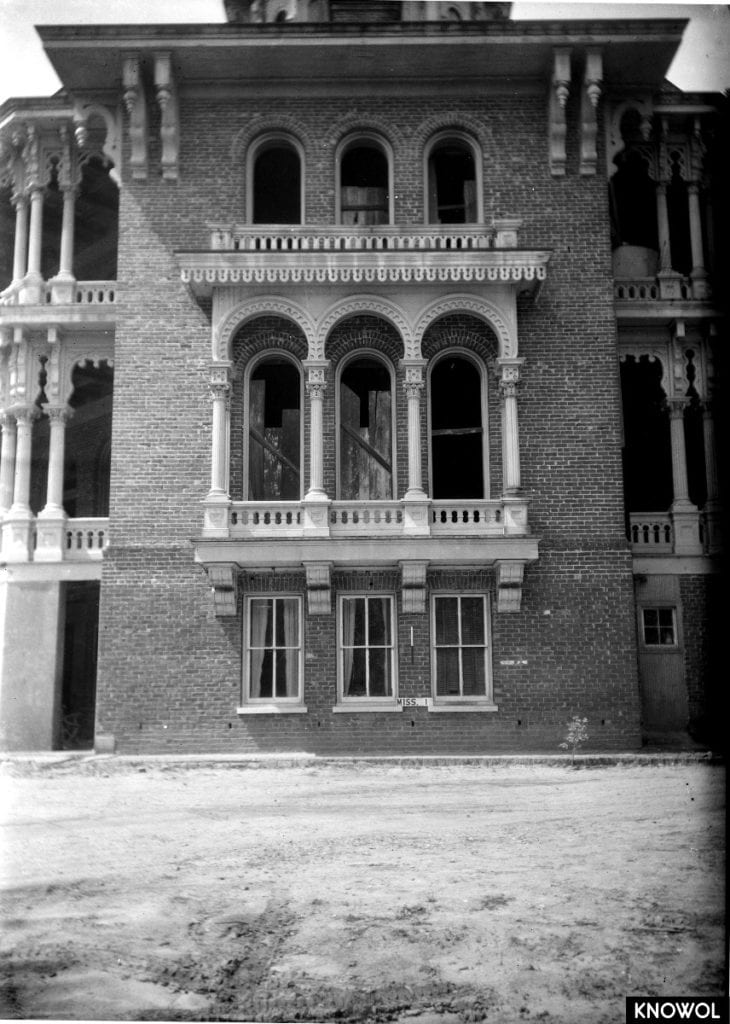 The eclectic decorative detail of the structure includes both Italian and Muslim influences. The bricks used in the structure were made on the premises, and lumber for the woodwork in the house was sent to Philadelphia to be carved and then returned to Mississippi. 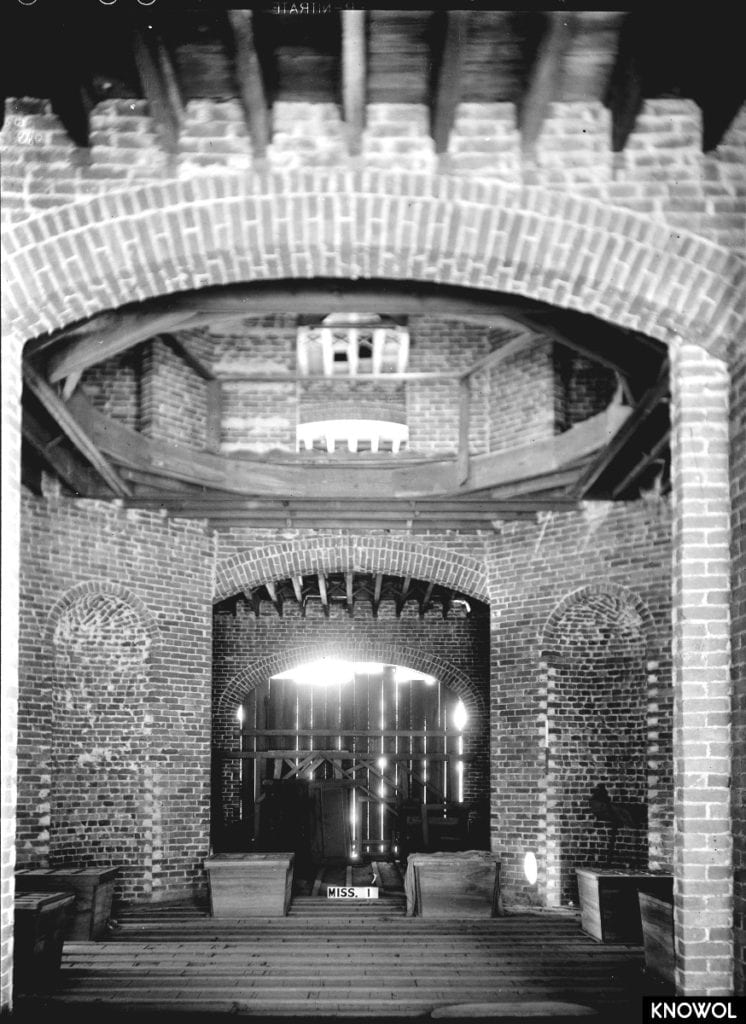 The main floor of Longwood was designed with small round holes in the floor that were to hold translucent stones that would let light shine into the basement underneath.

The four brick chimneys of the house are located near the four corners of the central rotunda, and each chimney contains fireplaces on each floor so that each of the 32 rooms has its own fireplace. 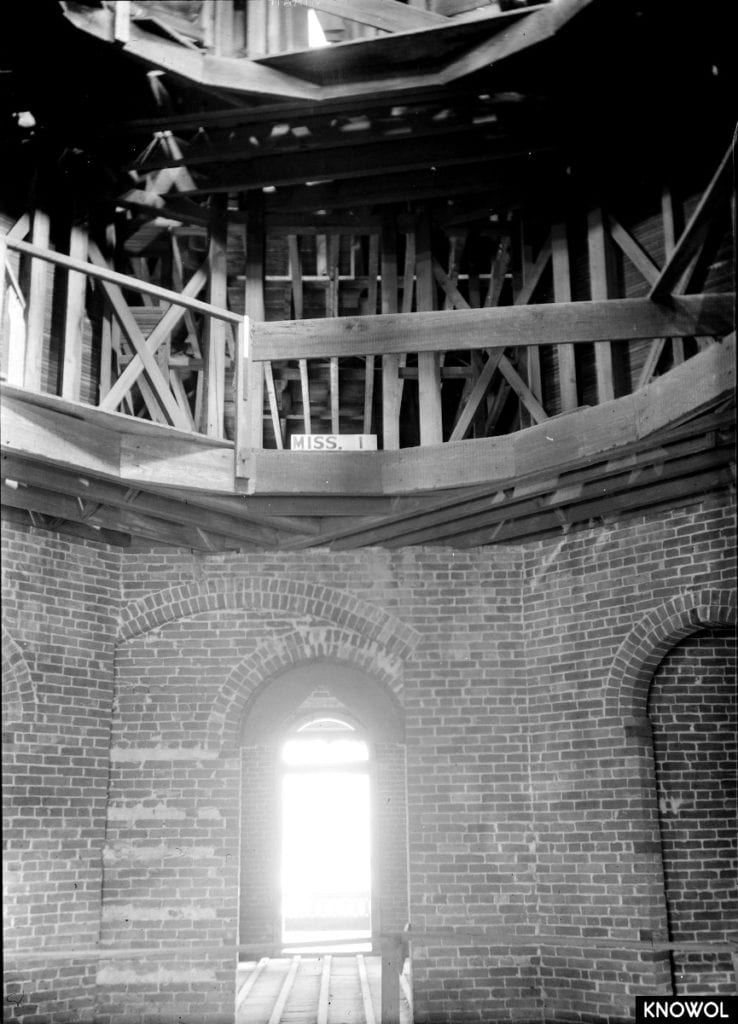 The doors leading to the balcony were designed to be on tracks so they would slide open like modern patio doors.

Much of the interior woodwork and furnishings were at sea when the Civil War began, and never reached Natchez due to the Union Blockade. Partially plastered columns lie in wait of an artisan to finish them. 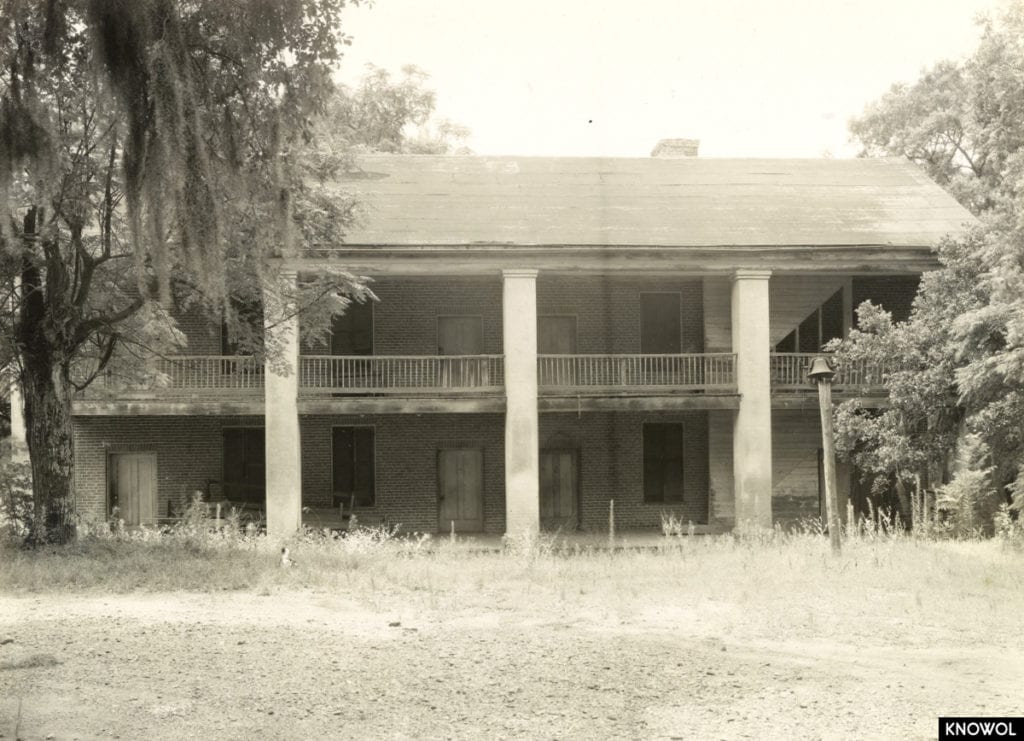 Servants eventually finished constructing nine rooms in basement of the house, where the Nutt family lived. This picture shows the servants quarters on the estate. Longwood was the last burst of southern opulence before the Civil War brought the cotton barons’ dominance to an end. 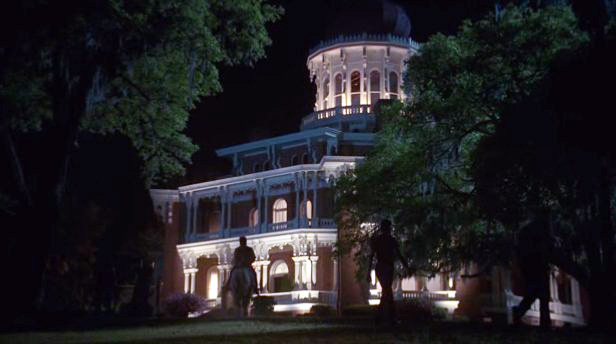 In 2010, Longwood was used in the HBO series True Blood. The mansion served as the home of Russell Edgington, the Vampire King of Mississippi and Louisiana. 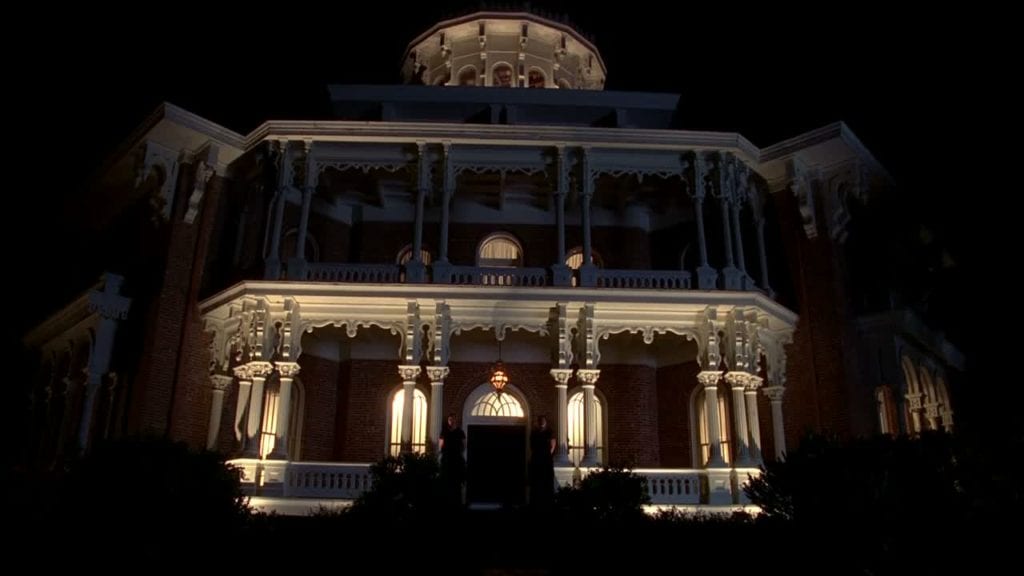 Longwood Mansion still stands, and has the distinction of being the largest standing octagonal house in America. The mansion is on the U.S. National Register of Historic Places, and is a National Historic Landmark. 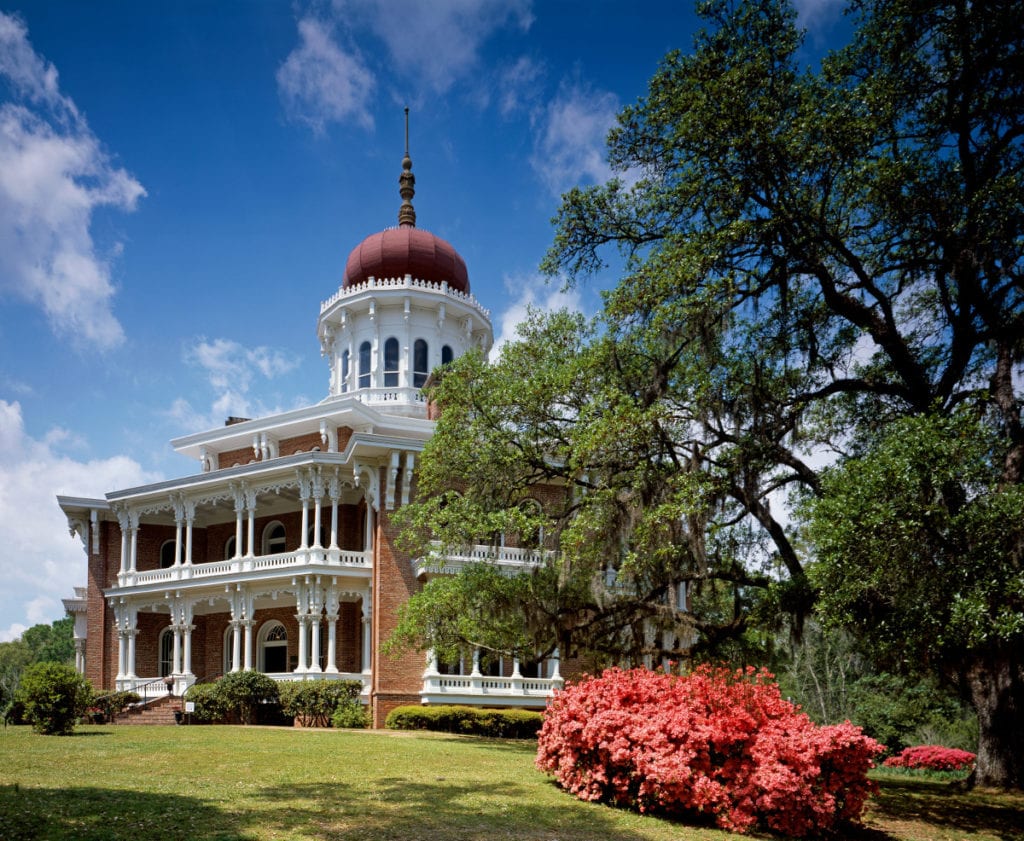 Longwood can be visited at 140 Lower Woodville Road in Natchez, Mississippi. To get more information on tours, visit Stanton Hall’s website.