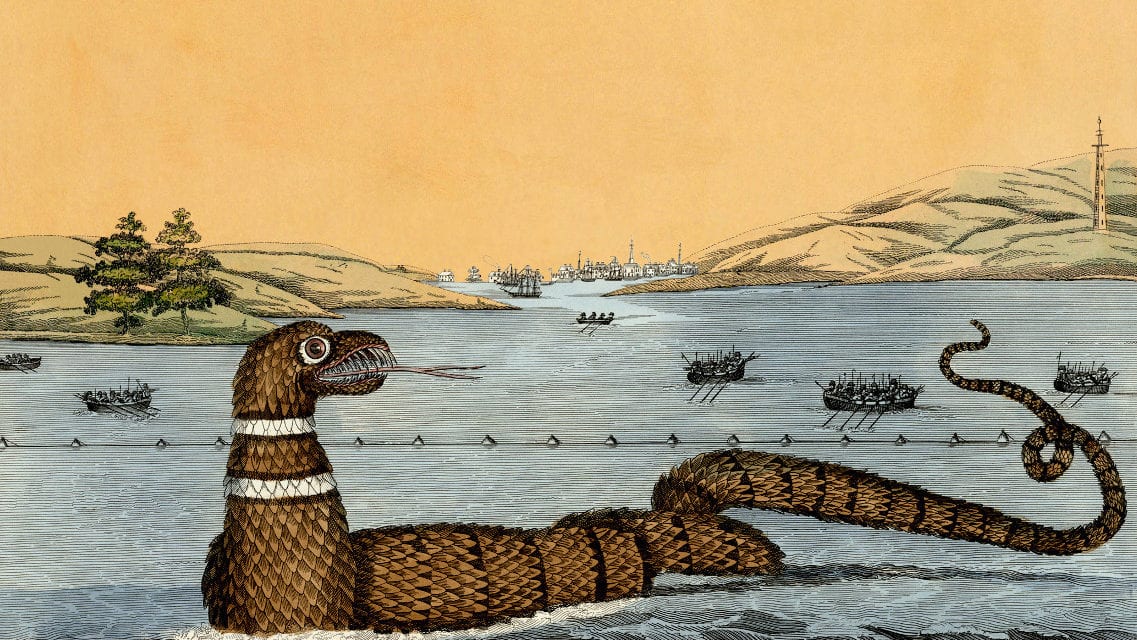 In August 1817, it was reported by various authorities that an animal with a unique appearance had been recently and repeatedly seen in the harbor of Gloucester, Cape Ann Massachusetts. It was said to resemble a serpent in its general form and motions, to be of immense size, and to move with wonderful speed. The creature appeared on the surface of the water only in calm and bright weather, and was reported by a number of reputable witnesses.

At a meeting of the Linnaean Society of New England in Boston on August 18th, 1817, U.S. district court judge John Davis, Jacob Bigelow, M.D., and Francis C. Gray, Esq. were appointed to a committee and put in charge of collecting evidence regarding the existence and appearance of any such “Gloucester Sea-Serpent”.

The committee received ten sworn depositions from “men of unblemished character”. Here are a few excerpts of their depositions from the Linnaean Society’s report on the Gloucester Sea Serpent.

“… on the tenth day of August A.D. 1817, I saw a strange marine animal, that I believe to be a serpent, at the southward and eastward of Ten Pound Island, in the harbour of Gloucester.

…he continued in sight for an hour and half. I was setting on the shore, and was about twenty rods (110 yards) from him when he was the nearest to me. His head appeared shaped much like the head of the sea turtle, and he carried his head from ten to twelve inches above the surface of the water. His head at that distance appeared larger than the head of any dog that I ever saw.

He moved very rapidly through the water, I should say a mile in two, or at most, in three minutes… On this day, I did not see more than ten or twelve feet of his body. “

“I have seen a strange marine animal, that I believe to be a serpent, in the harbour in said Gloucester… His head formed something like the head of the rattle snake, but nearly as large as the head of a horse.

When he moved on the surface of the water, his motion was slow, at times playing about in circles, and sometimes moving nearly straight forward. When he disappeared, he sunk apparently directly down, and would next appear at two hundred yards from where he disappeared, in two minutes.”

“I was looking at him with a spy-glass, when I saw him open his mouth, and his mouth appeared like that of the serpent; the top of his head appeared flat. His motion when he turned was quick, but I will not express an opinion of his velocity…”

“On the fourteenth day of August, A.D. 1817, I first saw an uncommon sea animal, that I believe to have been a serpent, in the harbour in said Gloucester.

“I was in a boat, and was within thirty feet of him. His head appeared full as large as a four-gallon keg; his body as large as a barrel, and his length that I saw, I should judge forty feet, at least…

…I fired at him, when he was the nearest to me. I had a good gun, and took good aim. I aimed at his head, and think I must have hit him. He turned towards us immediately after I had fired, and I thought he was coming at us; but he sunk down and went directly under our boat, and made his appearance at about one hundred yards from where he sunk…

… My gun carries a ball of eighteen to the pound; and I suppose there is no person in town, more accustomed to shooting, than I am. I have seen the animal at several other times, but never had so good a veiw of him, as on this day. His motion was vertical, like the caterpillar…

Gaffney said the animal moved at the rate of “a mile in two, or at most, three minutes”. William B. Pearson, a merchant, corroborated Gaffney’s story and said the snake swam out from Webber’s cove and headed toward Ten Pound Island.

” I saw a singular kind of animal or fish, which I had never before seen, passing by our quarter, at a distance of about forty feet, standing along shore…. It was of a dark color. I saw no tongue, but heard William Somerby and Robert Bragg, my two men, who were with me, call out, “look at his tongue…”

… I have seen whales very often; his motion was much more rapid than whales, or any other fish I have ever seen; he left a very long wake behind him; he did not appear to alter his course in consequence of being so near the vessel…

I have been to sea many years, and never saw any fish that had the least resemblance to this animal.

Until 1817, there were no reliable illustrations of the Sea Serpent, but on September 2, 1817 Judge John Davis wrote to Lonson Nash, Surveyor of Gloucester and former Senator, saying,

“We understand that a gentleman in Gloucester, (Captain Beach) has a drawing, supposed to be a pretty good representation of the animal. Some information respecting this drawing would be agreeable…”

“Captain Beach has been in Boston for a week past, and I am informed that he is still there. An engraving from his drawing of the serpent has been, or is now, being made in Boston…”

KNOWOL obtained and restored an original print of Captain Beach’s drawing. This illustration of Gloucester’s Sea Serpent was first published by E.J. Lane and J. How of Boston in 1817, and shows the Gloucester Serpent as it was seen near Cape Ann, Massachusetts on August 23rd, 1817.

Click here to see the Gloucester Sea Serpent in 1817. 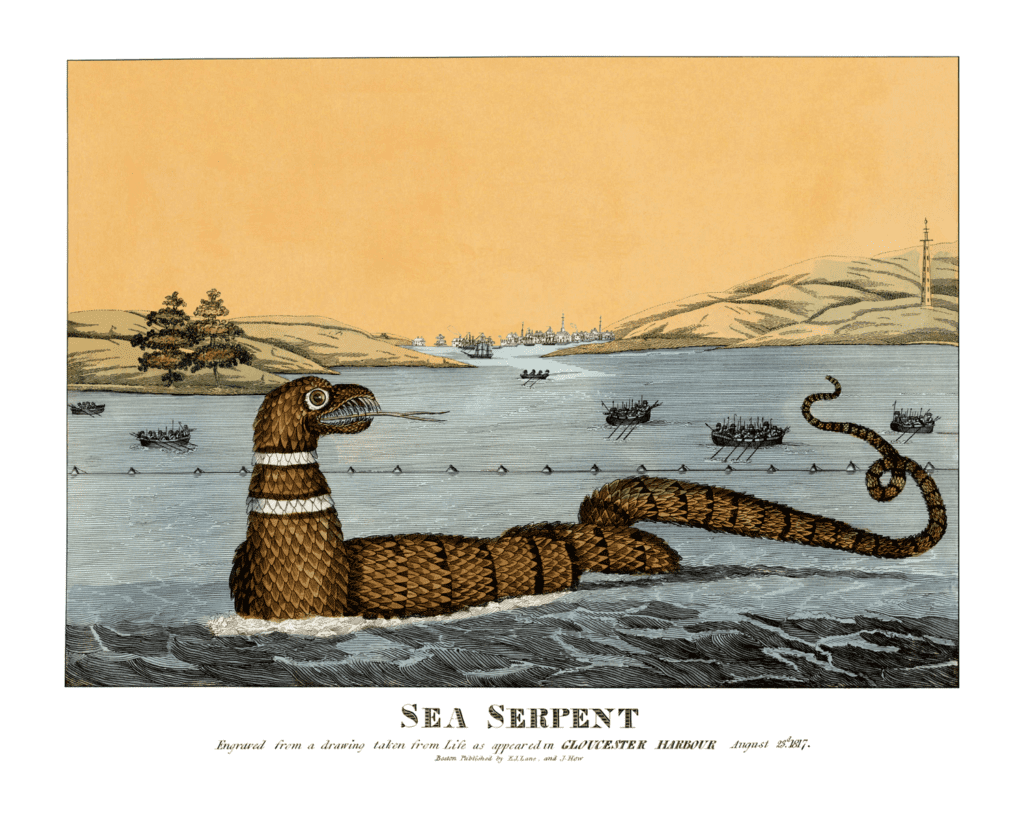 Reproductions of the restored print are available here.

Four weeks after Beach’s drawing was made, a young serpent of a very similar appearance, and supposedly the child of the larger serpent, was killed by a farmer named Mr. Colbey in a field near Loblolly Cove. Mr. Colbey gave the following account of his encounter with this reptile.

“Mr. Colbey says that he and two of his sons were gathering hay, when the young serpent was first discovered by one of his boys, who called to his father to run, for he never saw such a strange snake. Mr. Colbey ran about four rods, with a pitchfork in his hand, before the young serpent had crept one rod.

As the serpent was passing over some loose rocks, he clapped his pitchfork down, and confined him against the rocks, when the snake exhibited more temper than he had ever seen displayed by one before. He threw his head around, seized his own body, held on, and shook “as one dog shakes another when fighting.”

His tail, likewise, seemed to be a weapon of defense, for he swung it around several times, and struck the end of it against the handle of the pitchfork, when Mr. C could distinctly hear a noise, which clicked like a pin when struck against the handle.”

The young serpent was exhibited for a few days at the house of Captain John Beach, after which it was carried to Boston and examined by a committee of the Linnaean Society, who determined that it belonged to the same species as the great serpent.

Lonson Nash sent a letter to David Humphreys on September 28th, 1817 confirming that Captain Beach had in his possession a young serpent that had been killed the day before,

“I have the pleasure of informing you, that captain John Beach, of this place, has in his possession a young Serpent, that was yesterday killed on the sea shore here, which we have no doubt is one of the young of the American Mammoth Serpent that has lately visited our harbour; and which justly excited your curiosity and attention. He was killed near Thatcher’s Island…”

Humphrey’s replied by telling Nash he had already sent four letters to the President of the Royal Society of London, trying to prove the existence of the serpent. Humphrey’s eventually viewed the carcass of the young serpent himself and wrote,

“The arrival of this creature… has afforded me an opportunity of cursorily inspecting and handling him. He is generally pronounced to be the veritable seed of the Sea Serpent.

It is truly a subject of surprise and astonishment, to find, that, in the opinion of a great number, and, I believe, I may say, of all of those who have seen both the animals, the color, properties, proportion, and peculiarities are precisely the same.

For example, allowing for difference of dimensions, the supposed infant Serpent exactly resembles the adult, in the flattish shape of the head; in the peculiar curvatures of the body; in the tapering and pointed finishing of the tail, more like that of a scorpion than a snake; and especially in the unprecedented formation of the protuberances on the back; insomuch that the delineation by Captain Beach and Mr. Penniman, presents a perfect facsimile, on a larger scale, and needs no alteration in a single feature.

This infant Serpent is well preserved, with no defect, except the loss of the lower jaw, occasioned by a blow. Teeth, or fangs, however, are discoverable.

Google Books has the entire collection of letters regarding the sea serpent that were sent from David Humphreys to Sir Joseph Banks, President of London’s Royal Society.

The team at KNOWOL has lovingly restored Captain Beach’s drawing that David Humphrey’s described as “a perfect fascimile” of the creature. Reproductions of the restored print are available on museum quality, archival paper to ensure that the legacy of Gloucester’s Sea Serpent is kept alive. Click here to get a copy of the restored print. 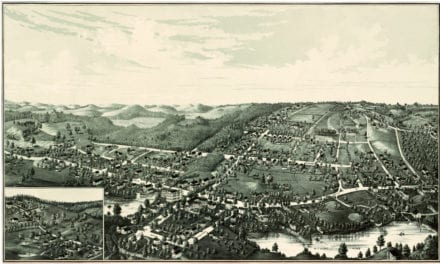 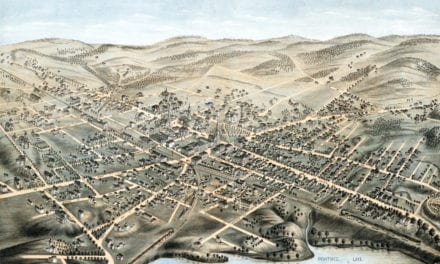 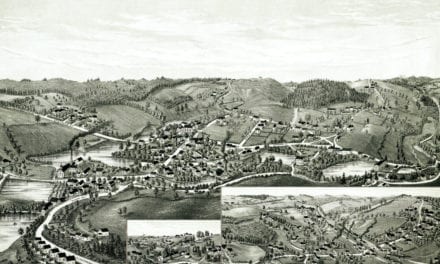 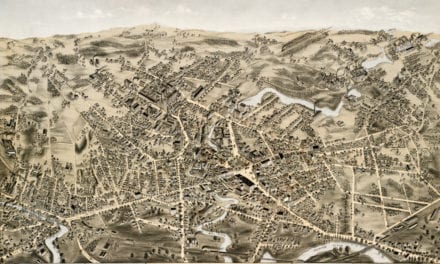