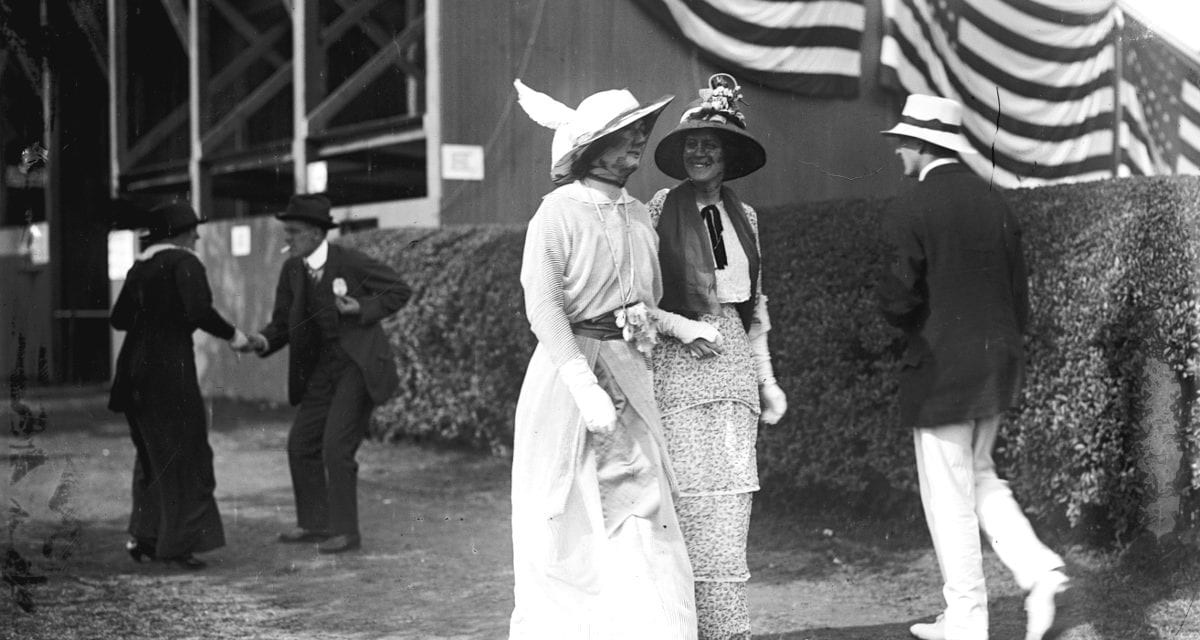 This collection of pictures shows what life was like on Long Island in the late 19th and early 20th century. These pictures range from 1884 to 1924. If this post is popular we’ll add more pictures of Long Island, so please share if you enjoy it!

1. The Last of the Shinnecock Indians 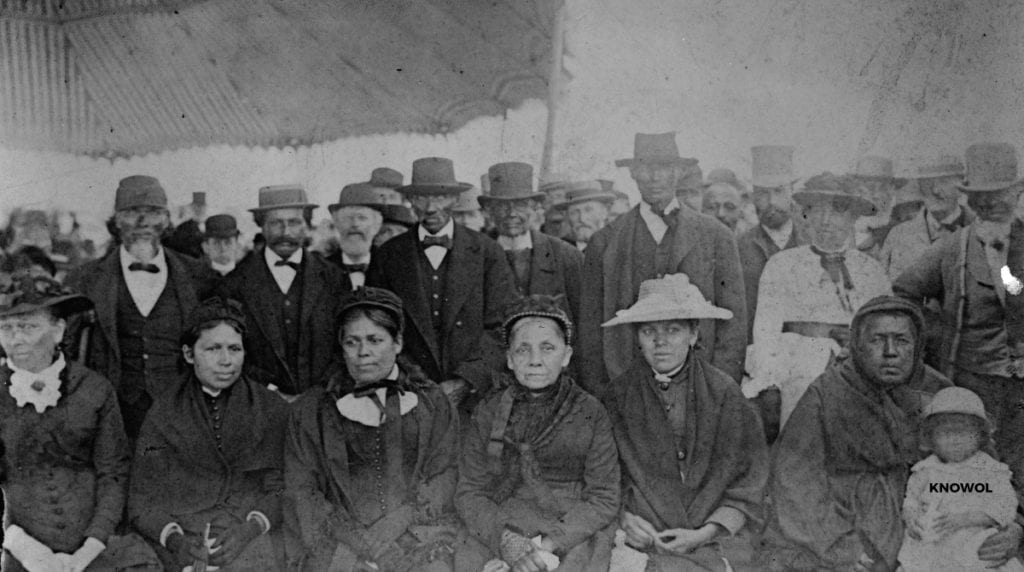 Throughout the 19th century, Shinnecock men worked as fishermen and sailors on whaling ships based at Sag Harbor and other local ports. It was said that no ship left Eastern Long Island without at least one Shinnecock male onboard, as they were known for their seafaring and navigational abilities.

Every Labor Day Weekend since 1946, the reservation has hosted a powwow based on ceremonies beginning in 1912. The Shinnecock Powwow is ranked by USA Today as one of the ten great powwows held in the United States. The Shinnecock Indians now have a cultural center and museum in Southampton, NY. 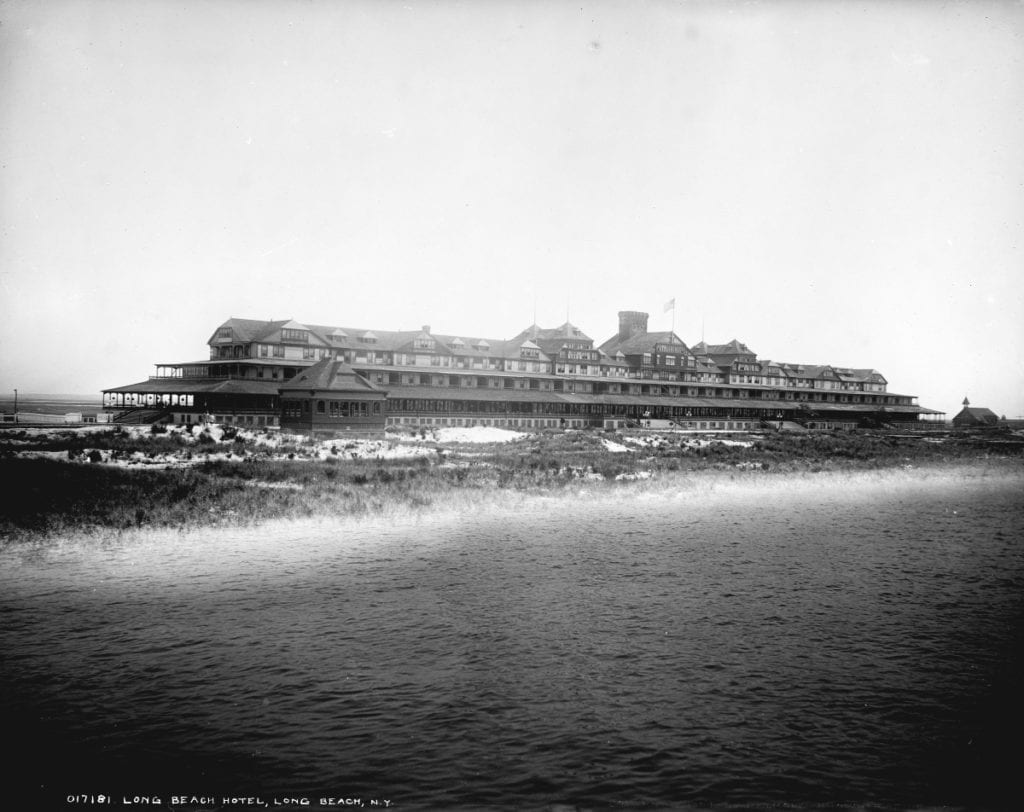 According to the book Long Beach Chronicles: From Pioneers to the 1933 Earthquake,

The hotel was built on the south side of Ocean Avenue on the bluff at the foot of Cedar Avenue. It rose three stories above the street and five stories above the sand, with the two lower beachfront floors serving as a bathhouse. On the ocean side was a twenty by eighty foot veranda. The dining room faced the sea, and its southern wall was all glass.” 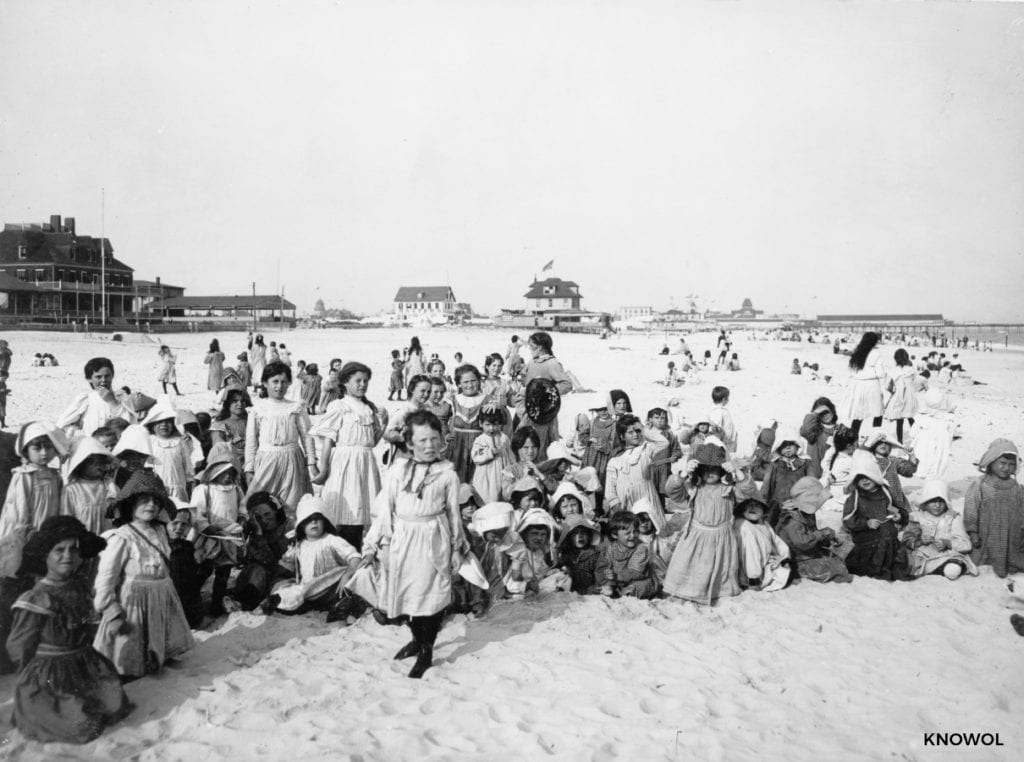 Children on the beach in Rockaway Long Island in 1903. Rockaway Beach is still a popular attraction for tourists and locals alike, but the bathing suits look substantially different. 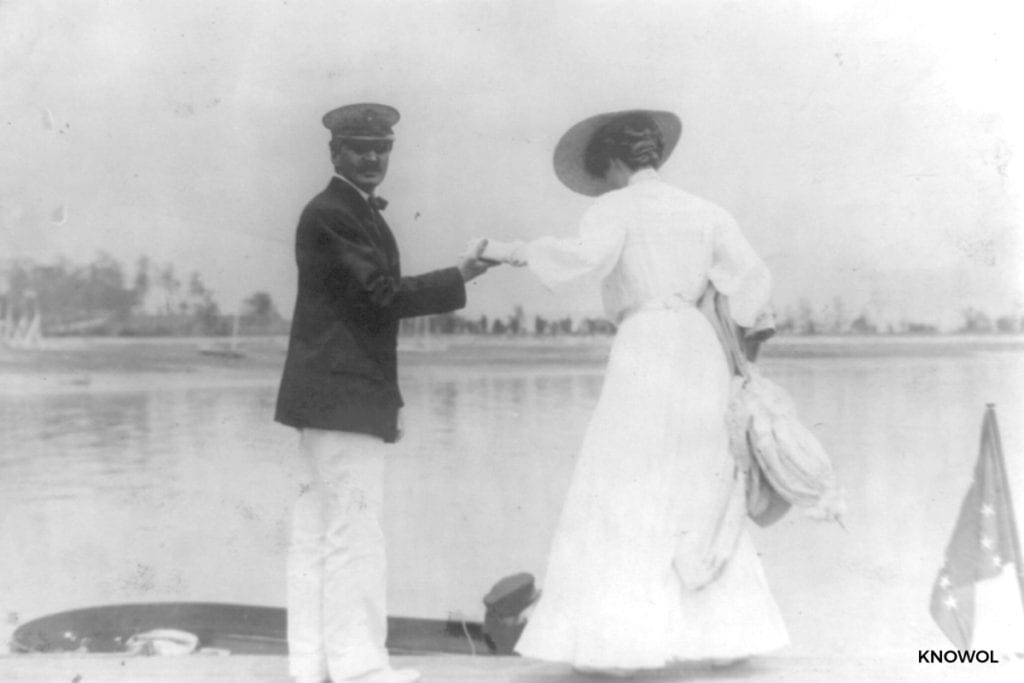 A man helping a woman into a boat in Oyster Bay, Long Island. This picture was taken at the Long Island Yacht Club in 1905. Boating was, and still is, a popular past time for Long Islanders. 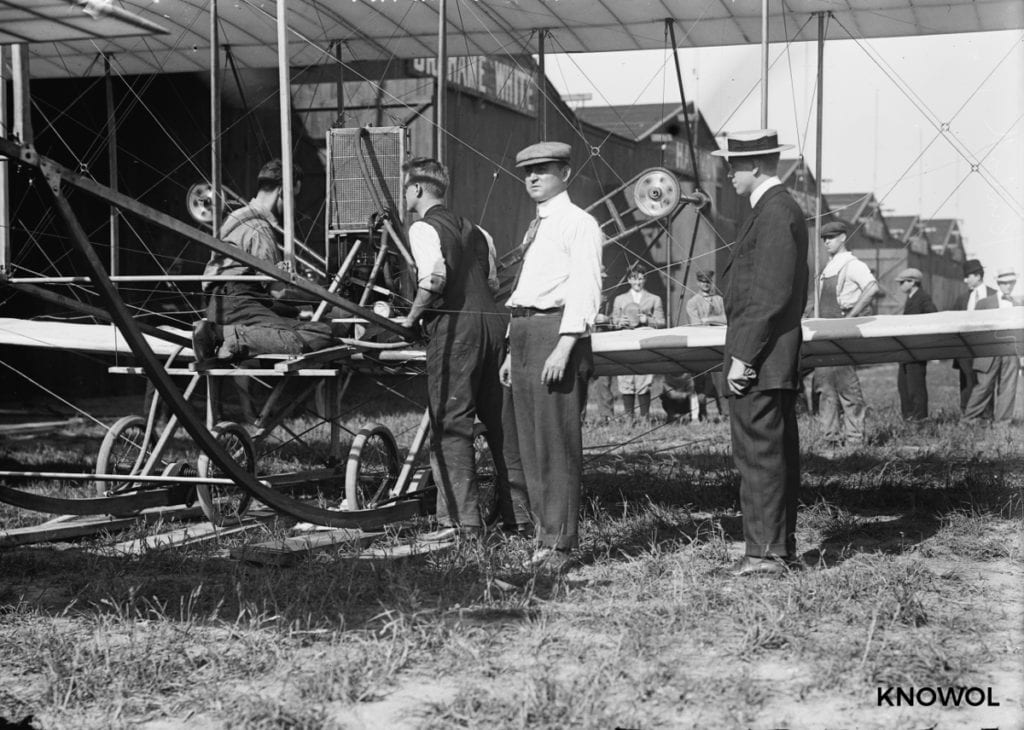 Photo shows Wilbur R. Kimball, an aviation pioneer, inventor, airplane builder and pilot who was also the Secretary of the Aeronautic Society of New York.

The picture was taken at the Nassau Boulevard Aerodrome International Aviation Meet, Garden City, Long Island, New York which was held between September 23 and October 1, 1911. 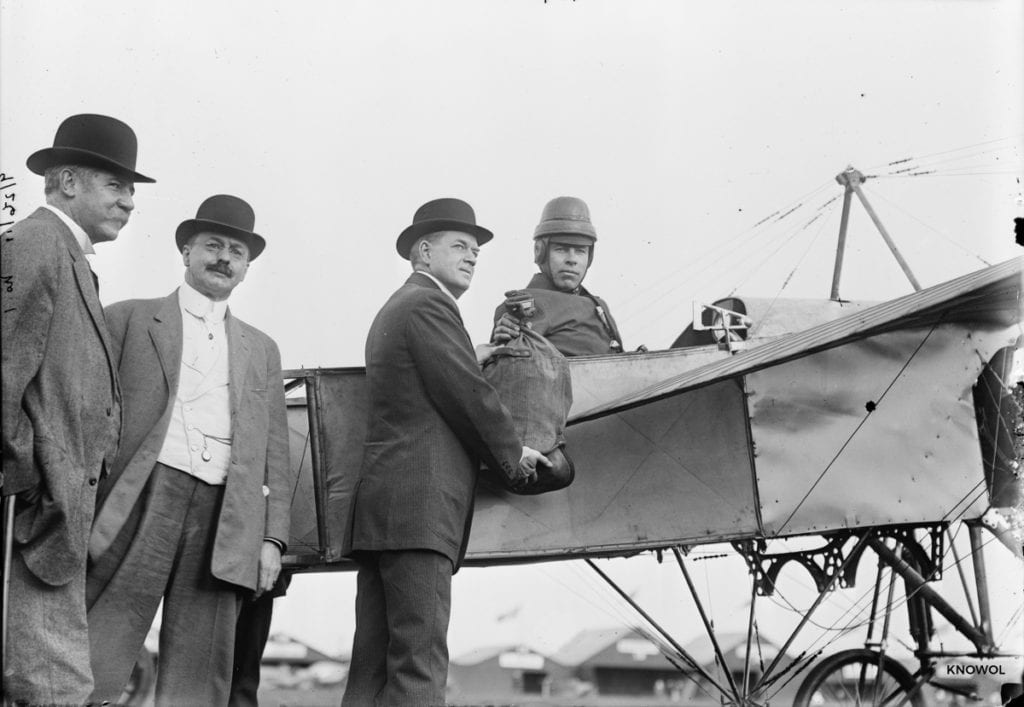 This photo shows the first official airmail flight in the United States. The pilot, Earle Lewis Ovington, is in a Bleriot XI airplane. Postmaster General Frank Harris Hitchcock is handing Earle the bag of mail, and Edward M. Morgan, postmaster of New York can be seen standing next to the plane. This picture was taken on September 23, 1911 at the Nassau Boulevard Aerodrome International Aviation Meet in Garden City, Long Island, New York. 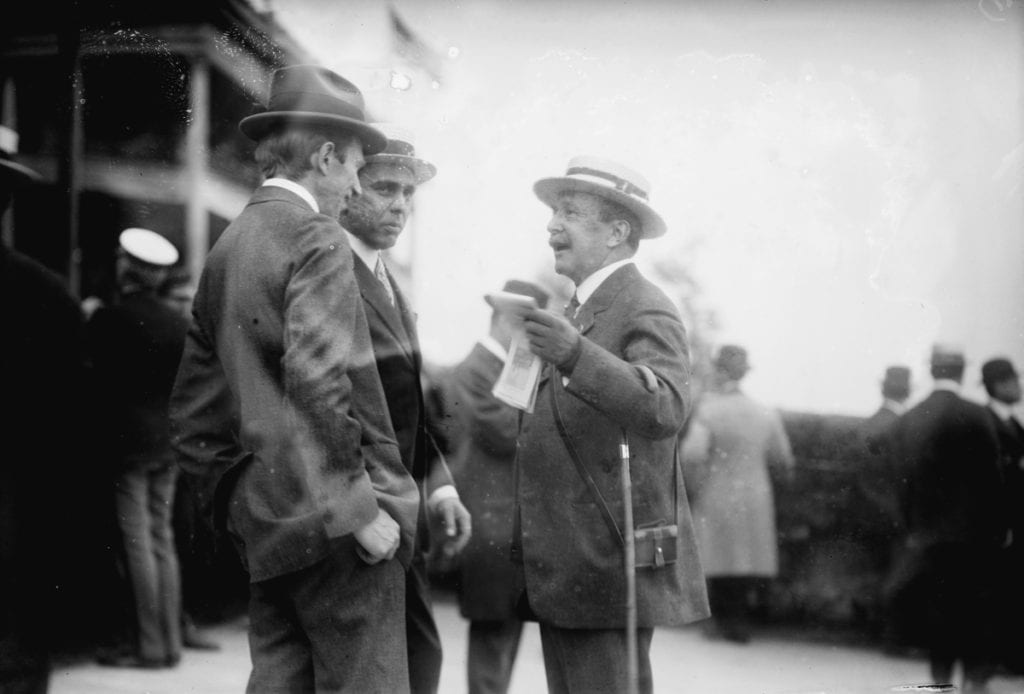 Belmont is known as “The Championship Track” because almost every major champion in racing history since the early 20th century has competed on the racecourse, including each of the 12 Triple Crown winners. 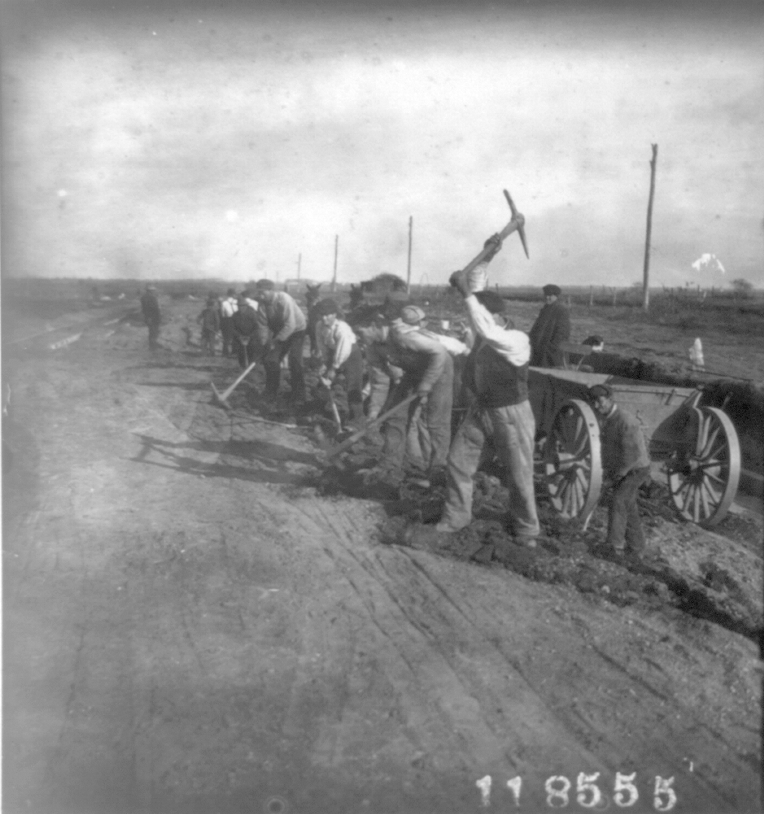 This picture of Garden City NY shows laborers excavating for laying out streets, in 1911. As you can see in the background, much of Garden City was open land at the time.

A music park in Long Beach NY. Locals would congregate at the park to listen to bands play music in the band shell seen at the center oft he picture. This picture was taken in 1911, and if you click on it you can see a closer view. 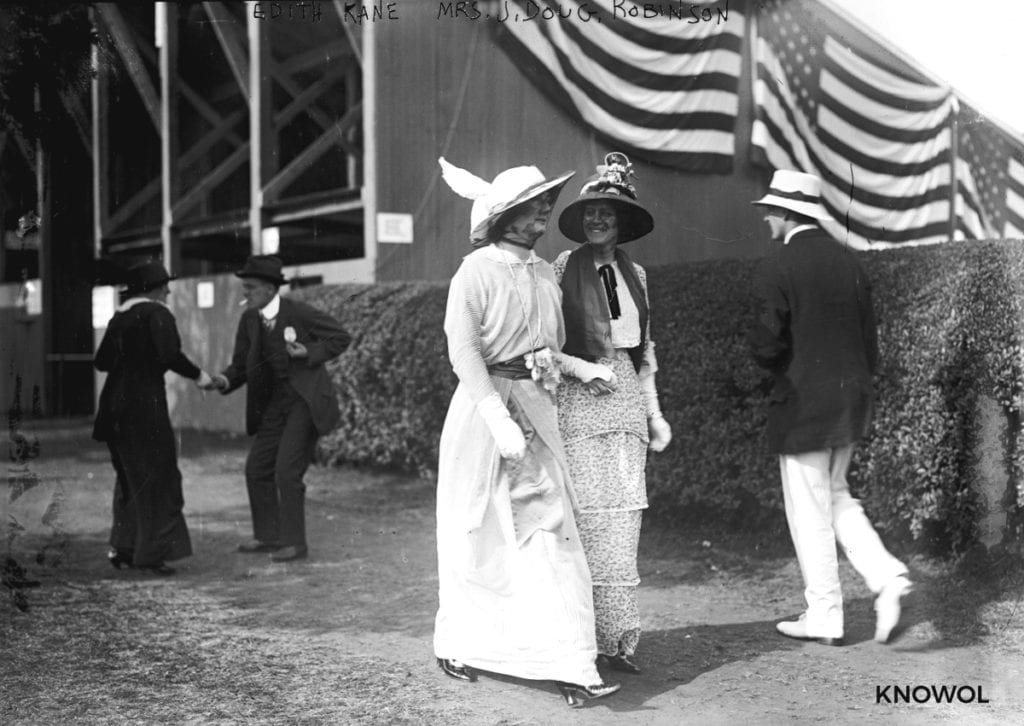 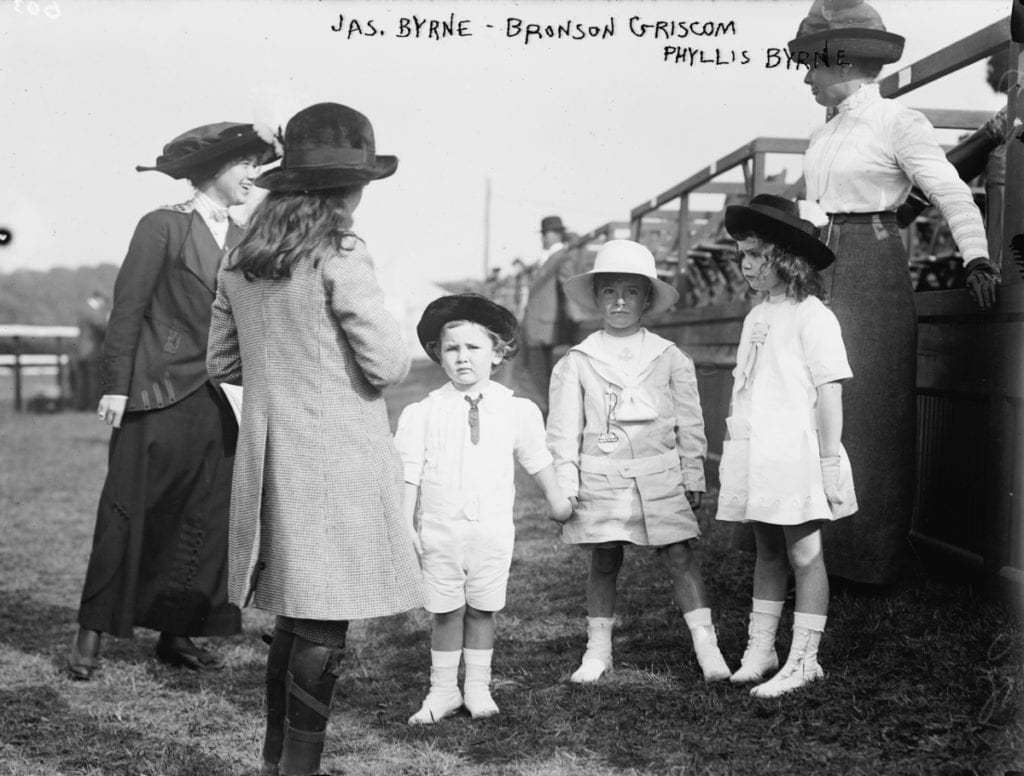 It was known as the “Augusta of its Day” and boasted members like J. P. Morgan Jr., Louis Comfort Tiffany, Frank Nelson Doubleday, Condé Montrose Nast, William L. Harkness, and members of the Vanderbilt and Astor families.

12. Suffrage Pageant from Mineola to Hempstead 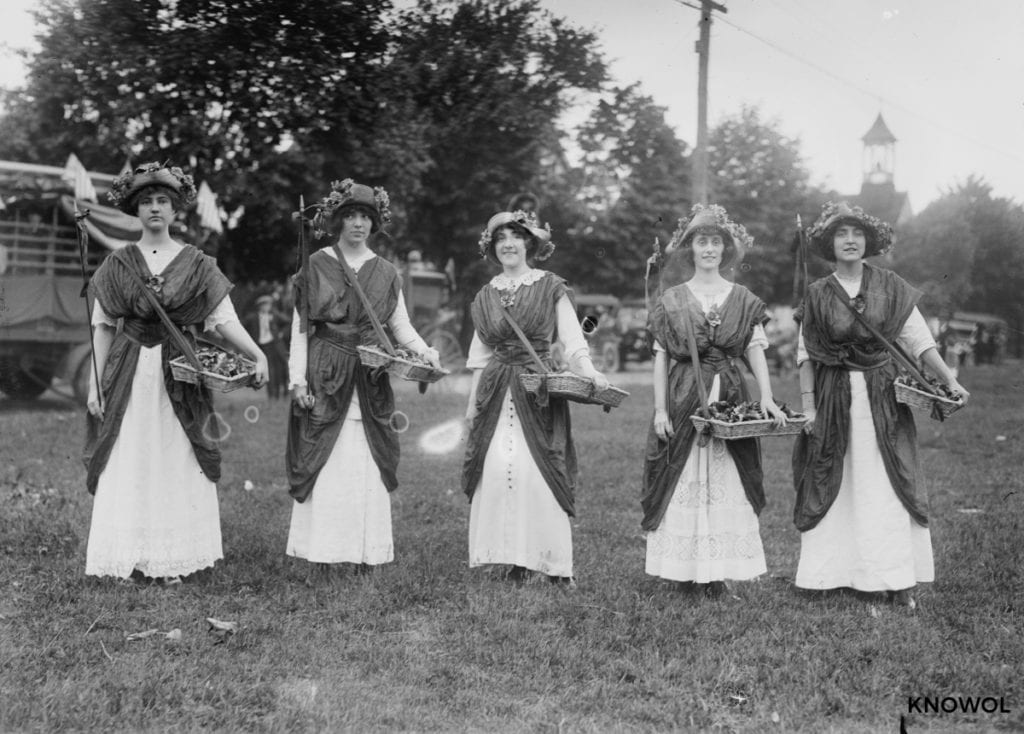 Photo shows participants in the suffrage pageant and parade which started in Mineola and went to Hempstead. This picture was taken on May 24, 1913. 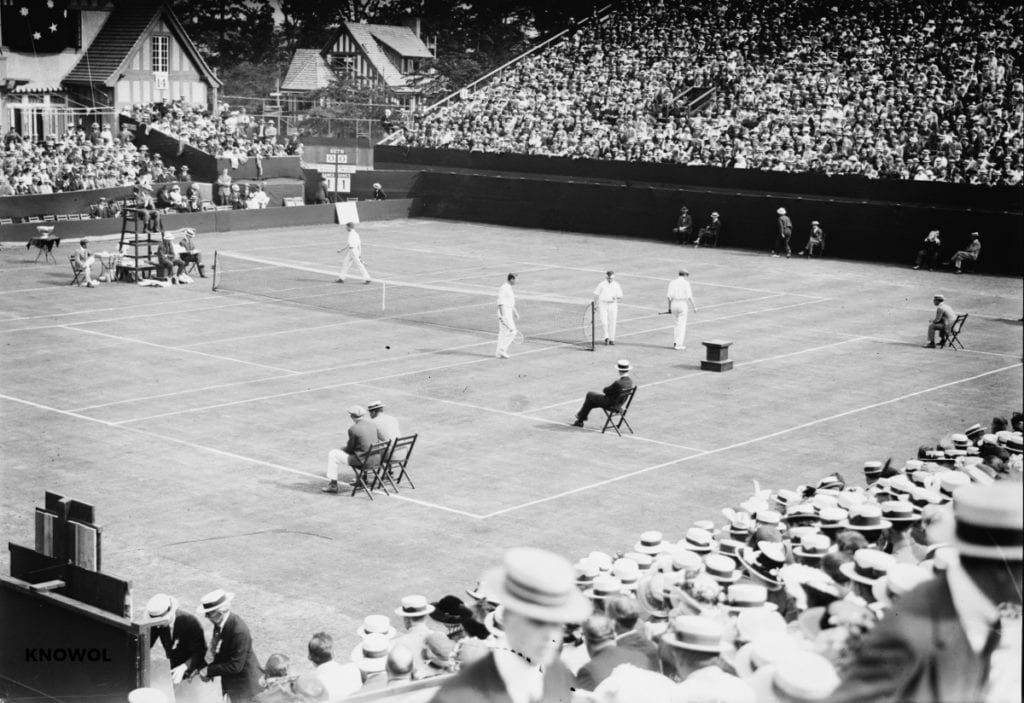 The Davis Cup is at left on a table. This picture was published in the New York Times on August 15, 1914. 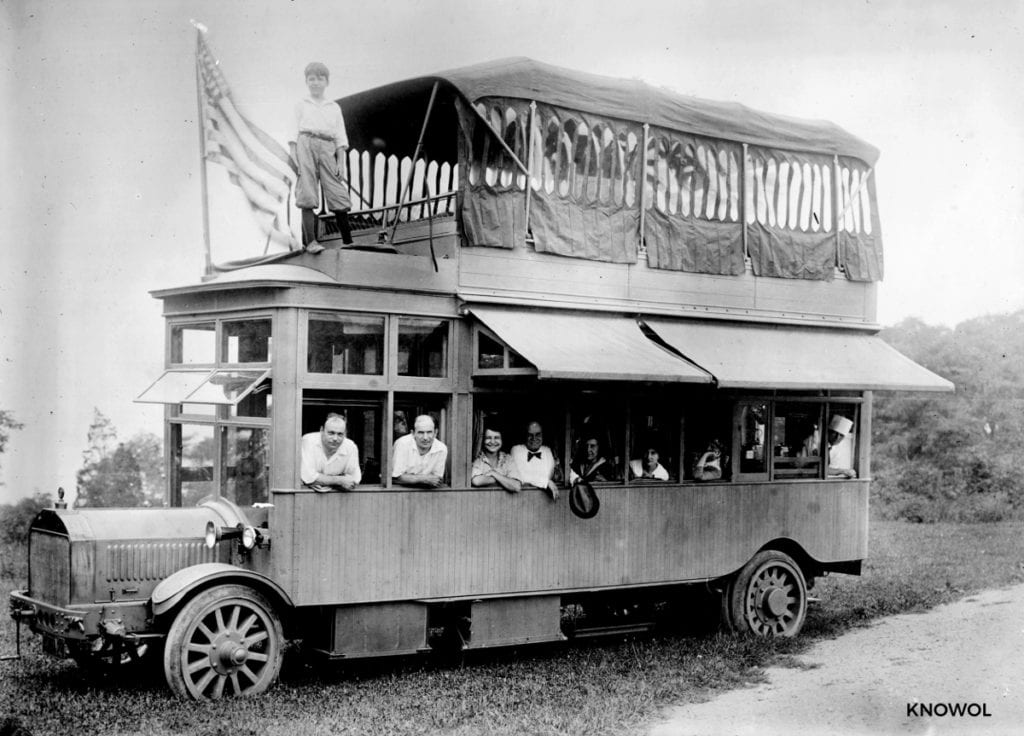 This picture shows the “land yacht” double-decker bus of Roland R. Conklin. traveled from Huntington, Long Island to Chicago in 1915. It is considered one of the early “motor homes”. 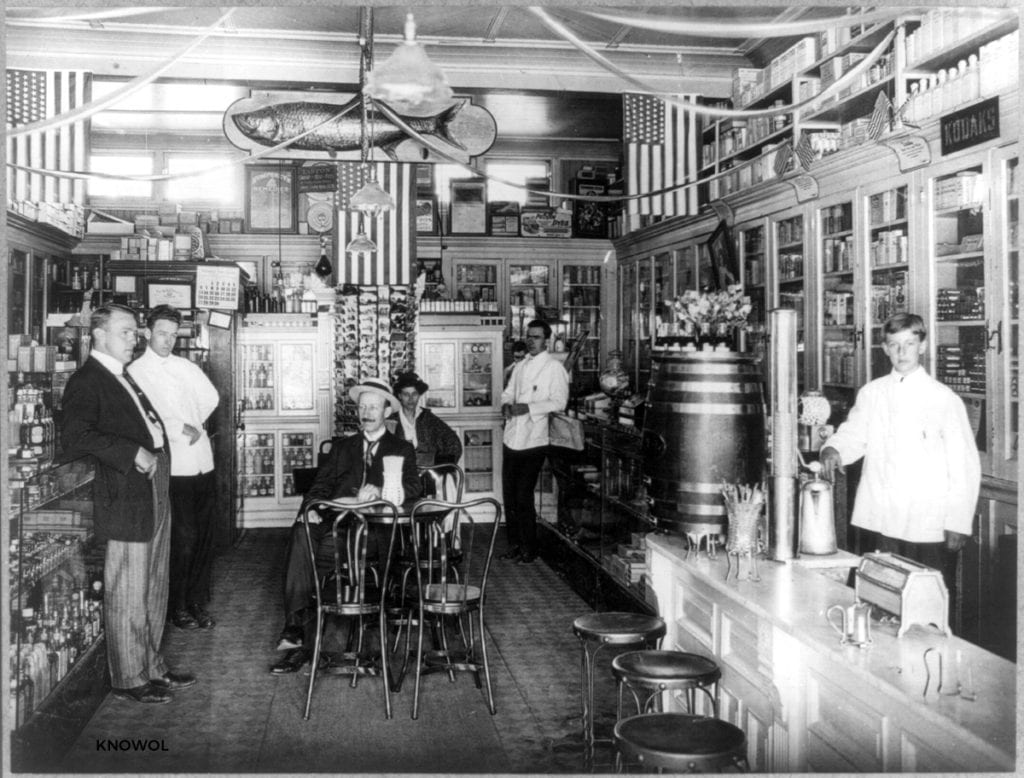 Photograph shows the interior of a soda fountain/drugstore with customers and employees in Islip, NY in 1915. 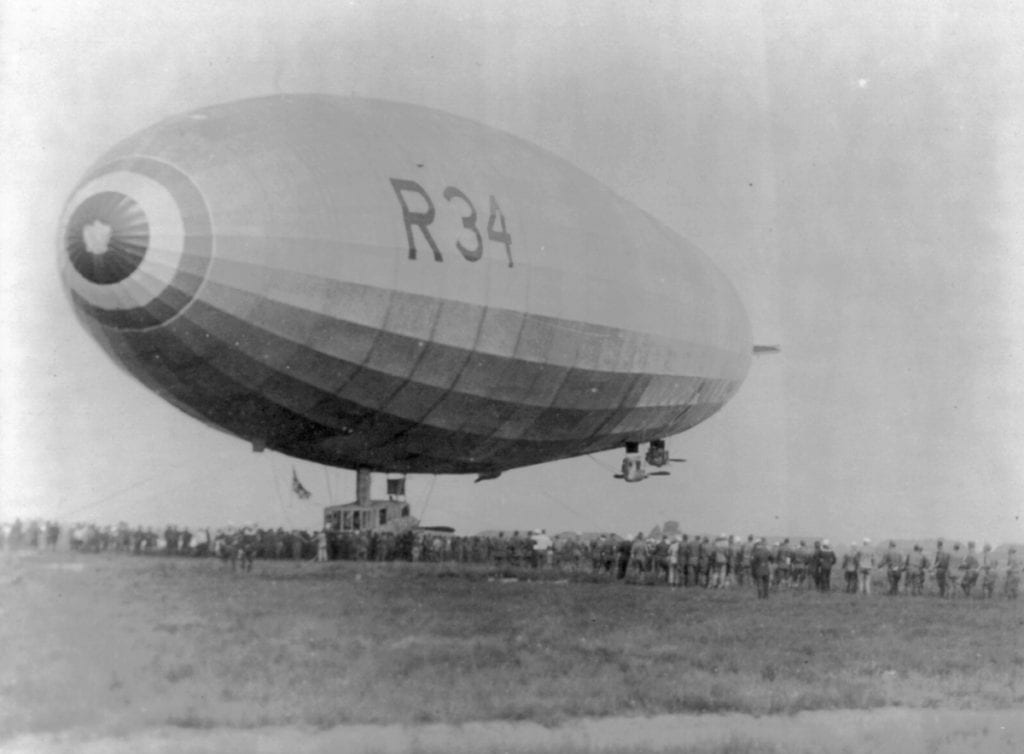 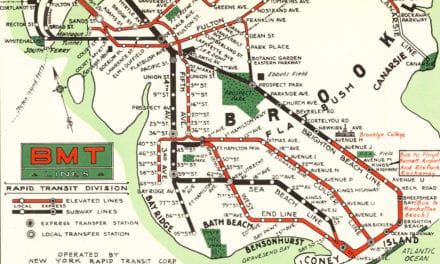 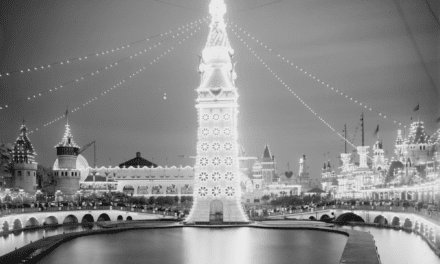 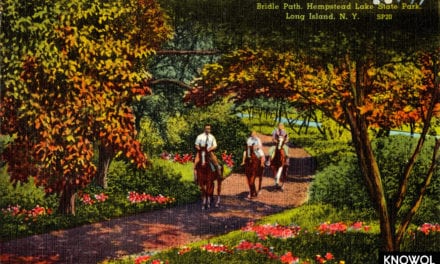 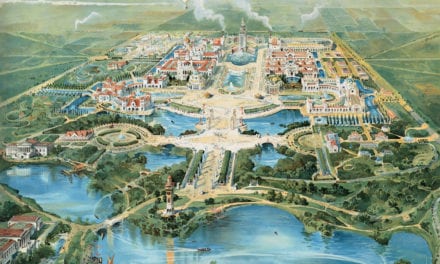