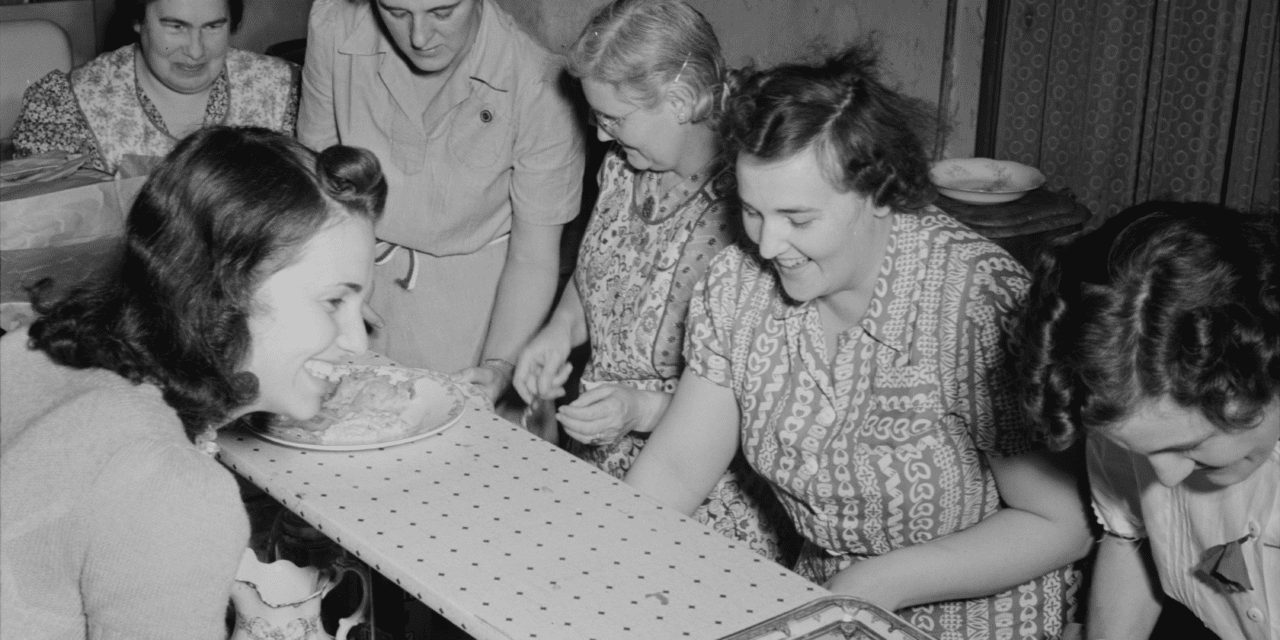 This collection of photographs shows Southington, Connecticut as it looked from May 23-30, 1942. The U.S. was in the midst of WWII and photographer Charles Fenno Jacobs was on assignment with the United States Office of War Information, an agency that created and distributed propaganda at home and abroad.

This series of pictures is called “An American town and its way of life, Southington, CT”. Click on the images to see higher quality versions. 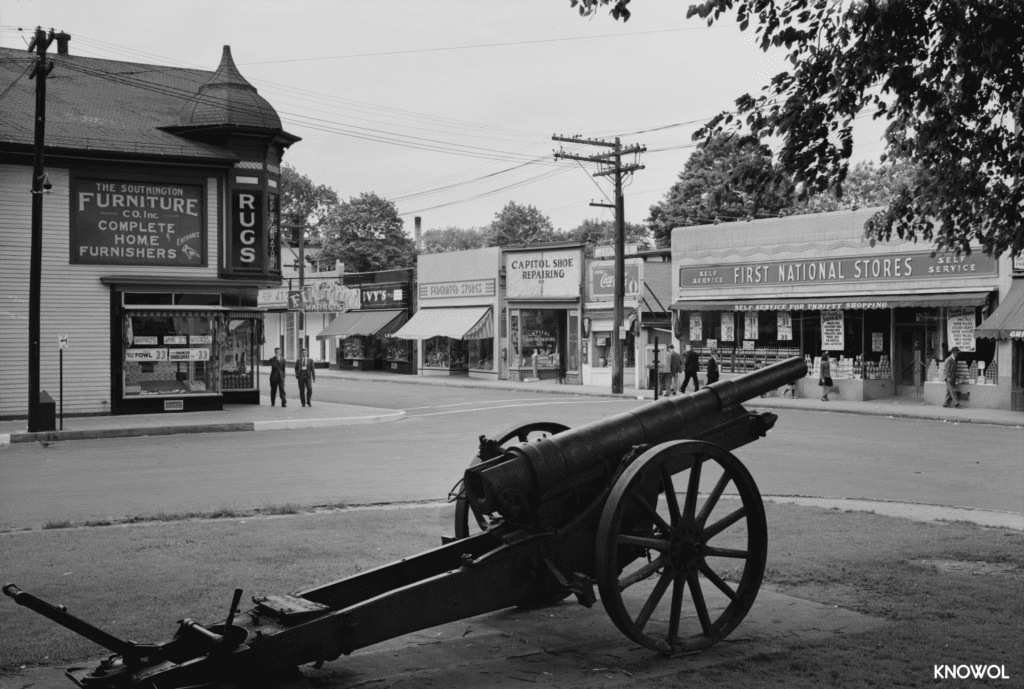 The view of Center Street from the Southington town green. There are stores such as Fulton Market, Capitol Shoe Repairing and First National Stores, a self-service grocery store. The website “Lost New England” has a picture of the same spot as it looks today. 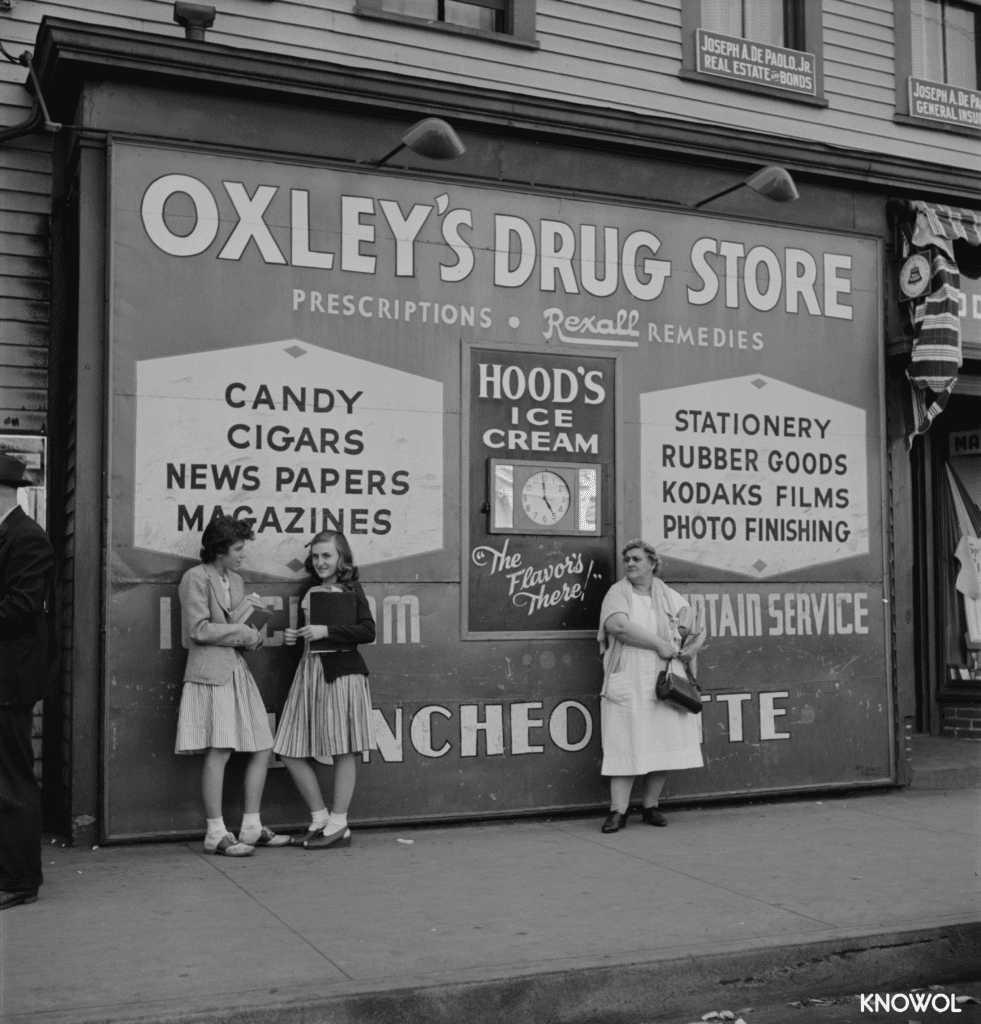 Women standing outside of Oxley’s Drug Store, at the corner of Center and North Main Street. The store opened in 1889 and served the Southington community for more than 100 years. The Southington Observer published an article when it closed in 1993.

Click here to see a colorized version of this picture. 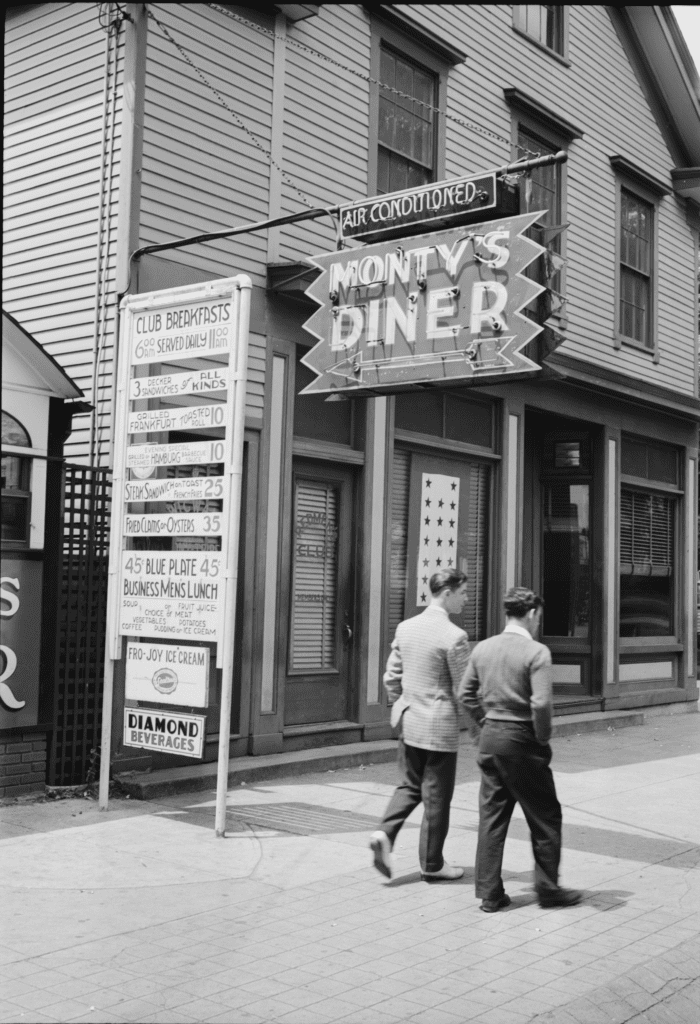 Monty’s Diner in Southington CT, May 1942. Next door is the Wigwam and Redmen’s Club. If you zoom in you can see a sign for “Steamed hamburgs”, a food unique to central Connecticut that remains popular to this day.

Monty’s Diner was open 24 hours a day during the war to accommodate shift workers in the town’s defense plants, but business declined in the postwar years and Monty’s closed in 1964.

4 – Shopping for Magazines in Southington, CT 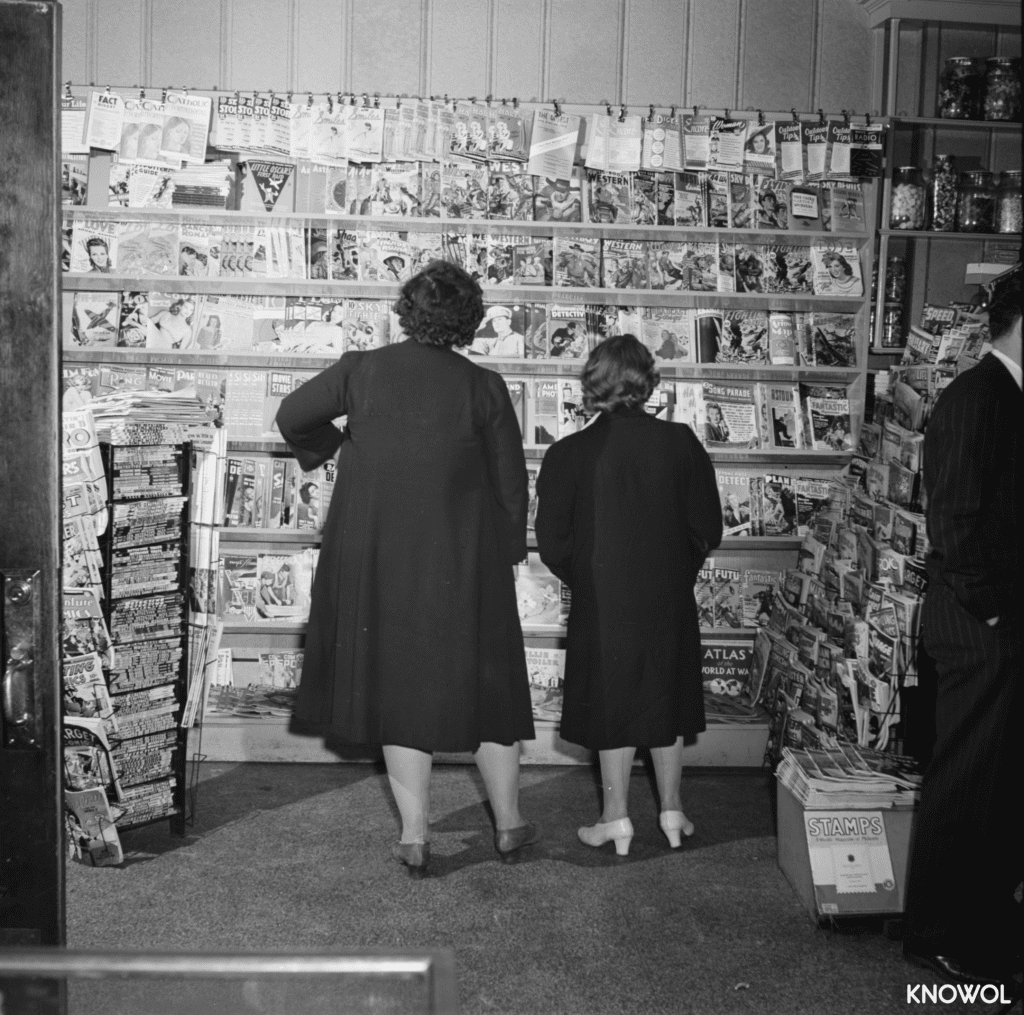 Two women shopping for magazines in Southington. The blog “Colorizing History” created an incredible colorized version of this picture. They researched every magazine and accurately added color to each one. The final image is extremely impressive.

If you want to zoom in on each magazine and admire the details, click here for the full size colorized image.

Dimitrios wasn’t here long before the country entered World War I, but he immediately joined the American Legion. You can see his “God Bless America” sign hanging in the background. If we could travel back in time to one place in Southington, this would be it.

6 – Grocery Shopping on a Saturday Night

The inside of First National Grocery Store, which you can see in the first picture. The store was self-service at a time when many other grocery stores required the clerk to get your items for you.

Mrs. Ethel Oxley in the drugstore she ran on the town’s main street. Her family had a business on this same corner for more than 200 years.

9 – Orchards and Farmland in Southington

Two young men walking to tend to their cows at a farm in Southington, CT. There are still many farms and orchards in Southington today, including Rogers Orchards and Karabin Farms.

10 – View of the Hanging Hills of Meriden, CT

This picture shows the view from a farm in Southington, CT. In the distance are the hanging hills, a range of mountainous trap rock ridges overlooking the city of Meriden and the Quinnipiac River Valley.

Southington parents waiting for their children to get on the bus.

12 – Children Getting on a School Bus

Southington students getting on the school bus.

13 – The American Flag in a Southington Classroom

At an early age, Southington school children learned the meaning of the American flag. These two girls are walking outside to join their classmates in the pledge of allegiance.

14 – The Pledge of Allegiance

Each day started with the kids saying the Pledge of Allegiance.

15 – Pledging Allegiance to the Flag

Later, during the 1920’s and 1930’s, Italian fascists and Nazis adopted a salute which had a similar form. This resulted in controversy over the use of the Bellamy salute in the United States. It was officially replaced by the hand-over-heart salute when Congress amended the Flag Code on December 22, 1942.

A young girl reading a book out loud to the class. The book is called, “Our New Friends”, a basic reading book that was published in 1946. You can see the the book on Amazon.

Notice the back wall filled with images of George Washington, war heroes and other important figures in American history. There is also a newspaper clipping that says “NO U.S. LOSS IN TOKYO RAID”, which is referring to the Doolittle Raid of April 18, 1942.

It turns out that story was propaganda. The U.S. did lose airmen in the raid, which was revealed four years later in February 1946.

18 – Enjoying Recess on the Playground

A dirt playground featuring basketball hoops and a volleyball net. There also seems to be a football or soccer field in the distance.

A young girl at Southington schoolhouse working out of a book titled “David’s Friends at School”, a book from 1936. You can see the cover and pictures of the inside of the book on Amazon.

20 – Finishing Work Before the Bell

Two girls finishing their schoolwork before the final bell.

Kids streaming out of the Southington schoolhouse.

A group of Southington schoolchildren waiting for their ride home.

This one room schoolhouse served as an elementary school to younger students.

24 – Lining Up Before Class

Schoolchildren lining up to enter their one room schoolhouse. Some things don’t change.

These students are reading the same book as the girl in image #19, “David’s Friends at School”.

The kids are done with school, time to explore the rest of Southington!

A view of a civil war cannon on the town green. According to the Southington Historical Society, the cannon was later melted down for a World War II scrap drive.

The wagon reads “handy helpers for defense”. During WWII, commodities such as gasoline, heating oil, metals, rubber, paper and plastics were rationed so that the country would have enough supplies for the war effort. Drives like these went towards supporting the war effort. Paper was needed for packing weapons and equipment before they were shipped overseas.

A woman and her daughter lounging in the front yard of their Southington, CT home. The adirondack chairs you see in the yard are still popular across New England.

Good to see the band uniforms haven’t changed much in 70+ years. 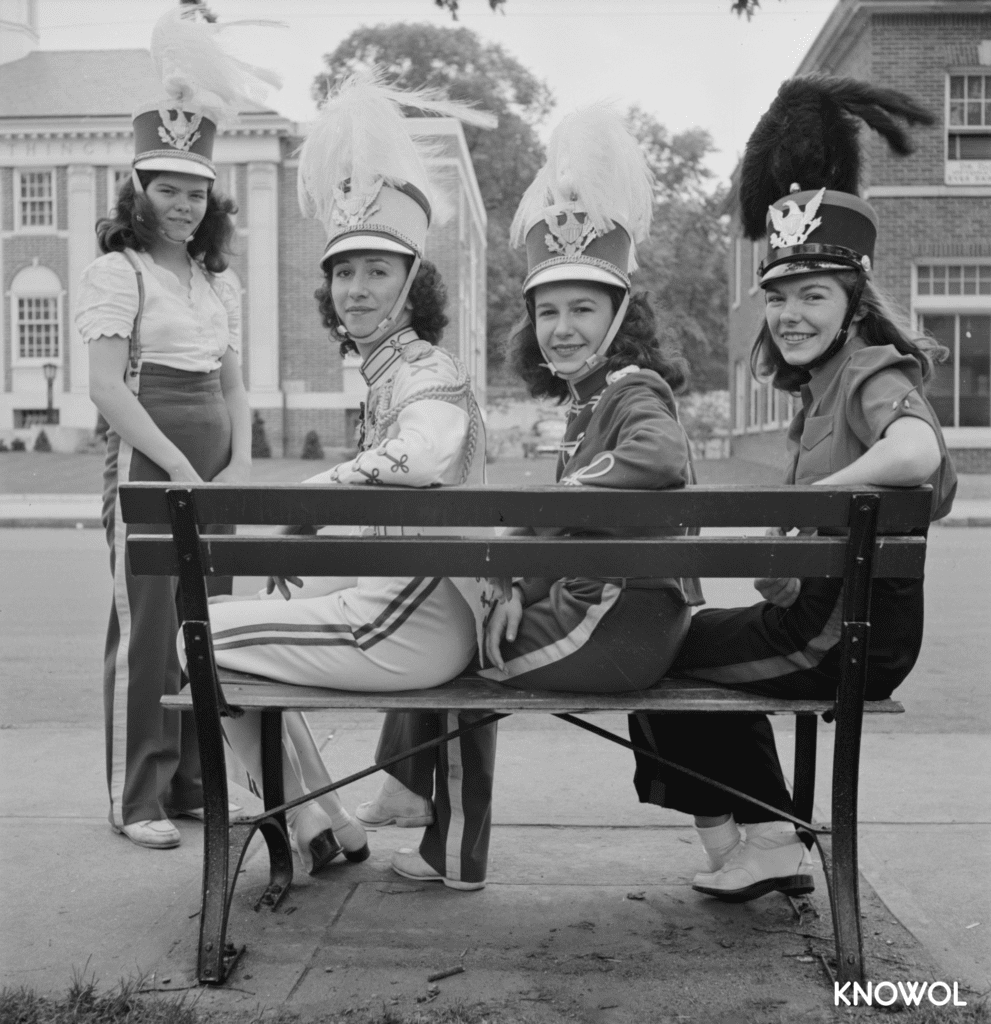 These girls are members of the Southington ban’d drump corps. They were waiting to perform in the Memorial Day Parade.

The First Congregational Church, the oldest of Southington’s eleven churches at the time. The photographer noted that the church looked substantially the same as when it was erected in 1830.

Reverend Wei Yung-ching, a visiting minister who formerly was mayor of the Chinese city of Tsing delivering a sermon.

On All Soul’s Day the Catholic congregation gathered in the Saint Thomas cemetery for an outdoor Mass which in 1942 was officiated by the Reverend Francis J. Mihalek.

This picture shows the stacks of the Southington public library in 1942. The library contained more than 15,000 books.

Membership fee in the club was purposely low ($35 dollars a year) so that everyone who enjoyed the game would have a chance to play. In 2016 dollars, that is about $515. The golf course is still open, but the current rate for a membership is approximately $1,500.

The Memorial Day parade moving down the main street. The small number of spectators is accounted for by the fact that the town’s war factories did not close. The town hall is in the left foreground.

At Beecher Street School, the student body consisted of half Americans of Italian descent and half Americans of Polish descent. The Queen of the Memorial Day parade was Emily Schwak, Polish; and the King was Philip D’Agostino, Italian.

Southington, Connecticut. Thomas J. Murphy, chief of the fire department, and its only salaried member, chatting with one of the volunteers.

The photographers note said “Southington’s fire department is an example of a people democratically working for the benefit of all. It is an organization of 100 trained volunteers who, when a fire occurs, come together to fight it without pay.”

The placard on the station reads, “Southington Hose Co. #4, Marion”. This was one of the four sub-stations of the fire department. Each station had a truck and firefighting equipment. When the fire gong sounded, the volunteers in the vicinity would man the truck and go to the fire.

Atwater Manufacturing Company made drop forgings since 1869, first for the manufacture of wagons and carriages, later for automobiles, and in 1942 for the war. The property was listed on the National Register of Historic Places in 1988. It is located at 335 Atwater Street in Southington, Connecticut.

Southington companies were pioneers in the manufacture of hand tools, sheet metal and forgings. Southington was also the site of the nation’s first cement mill and its first bolt factory.

The settlement grew, prospered, and came to be known as “South Farmington” and later, the shortened version, Southington.

The Old Mill was a popular place for young men of Southington to take girlfriends on Saturday night. The building was erected in 1737 as one of the first metal mills in the American colonies.

The old mill is now known as “The New Mill“, an American restaurant in Southington. We’ve never personally eaten at the New Mill, but if anyone associated with the restaurant wants to offer us a meal, we’ll gladly update our readers and let them know how the food is! Contact us here!

After dinner and drinks, the Old Mill turned into one big dance floor.

James Pompey came from Italy in the 1920’s on the advice of a brother. He settled in Southington, Connecticut and ran a farm. Immigrants of Finnish, Slav, German, and Polish descent helped him to farm it.

50 – Andrew Smedberg and His Cat

Andrew Smedberg came to America in 1920 from Sweden, and is seen here with his farm cat. He was broke when he arrived but by hard work and perseverance was able to acquire what he had in 1942 – a thriving dairy farm that earned him a “good living” for his family of seven, he said.

51 – Relaxing on the Porch in Southington, CT

A couple sits on the porch of their home in Southington, CT. A church steeple is seen in the distance.

A Sunday dinner honoring twenty-one year old Corporal Robert Hurlbut, who was home on his first furlough from the army. His whole family was on hand for the occasion, including the married and grandchildren. Corporal Robert is not the only Hurlbut serving his country. The elder Hurlbut works in a defense plant and Mrs. Hurlbut and all of the children old enough are enrolled in various American voluntary services.

53 – Cleaning Up After Dinner

Women pitching in to clean the dishes after a meal.

54 – Playing Bocce in the Yard

The photographers caption reads: “Bocci, an Italian game somewhat like bowling, is another popular sport in Southington.”

Rochambeau was a French nobleman and general who played a major role in helping the Thirteen Colonies win independence during the American Revolution. He served as commander-in-chief of the French Expeditionary Force that embarked from France in order to help the American Continental Army fight against British forces.

During the American Revolutionary War, the Southing community, Marion specifically, was the site of the camp of the French general and his troops. In June 1781, French troops under Rochambeau’s command left Farmington and marched 13 miles to Marion, where they made camp. They remained in the area for four days.

The French general was leading 6,000 soldiers through town on his way to Yorktown, the site of the colonial victory that ended the Revolutionary War. The area of the encampment has since become known as French Hill. A marker on the east side of Marion Avenue commemorates the French campsite.

Please share this with your Connecticut friends using the buttons below! 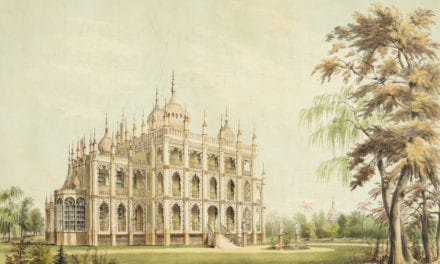 Historic map of the borough of Southington, CT from 1893 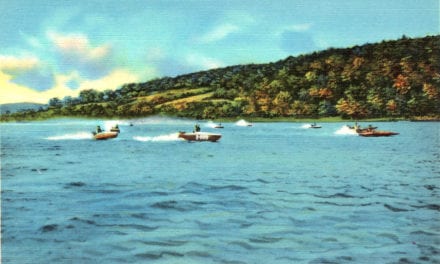