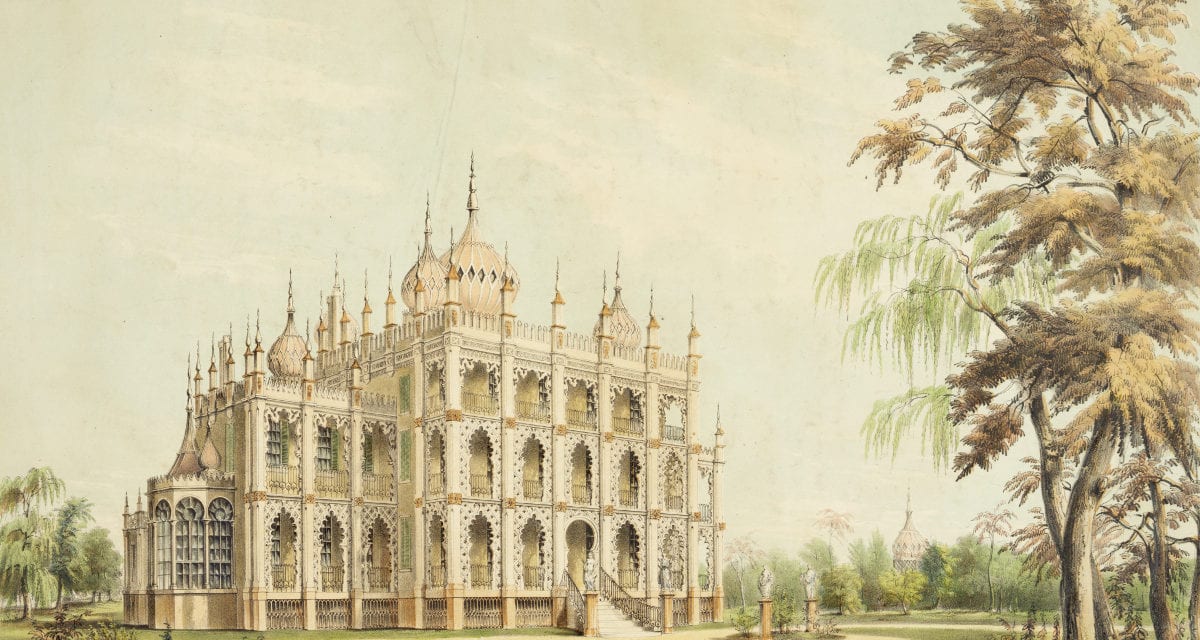 “Nowhere in all my travels in America and abroad had I seen a city whose very position presented so many and varied attractions.

Situated on Long Island Sound, with that vast water-view in front, and on every other side a beautiful and fertile country with every variety of inland scenery, and charming drives which led through valleys rich with well-cultivated farms, and over hills thick-wooded with far-stretching forests of primeval growth-all these natural attractions appeared to me only so many aids to the advancement the beautiful and busy city might attain, if public spirit, enterprise, and money grasped and improved the opportunities the locality itself extended.

I saw that what Nature had so freely lavished must be supplemented by yet more liberal Art.” 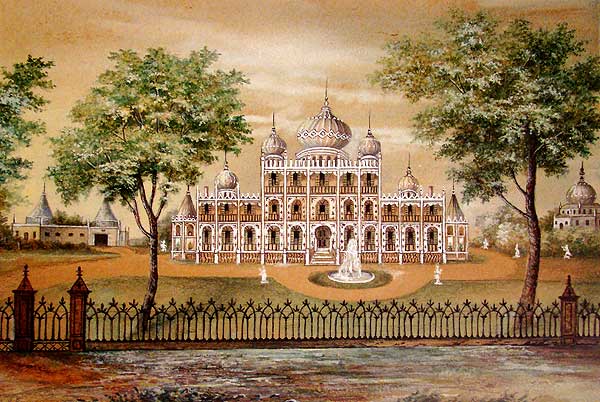 Barnum conceived the idea for the gorgeous and eccentric Iranistan when he was on a trip to Brighton, England, where he visited the Royal Pavilion built by George IV. At the time it was the only specimen of Oriental architecture in England and the style had not yet been introduced to America. Barnum said,

“I concluded to adopt it, and engaged a London architect to furnish me a set of drawings after the general plan of the pavilion, differing sufficiently to be adapted to the spot of ground selected for my homestead.

On my second return visit to the United States, I brought these drawings with me and engaged a competent architect and builder, giving him instructions to proceed with the work, not ‘by the job’ but ‘by the day’, and to spare neither time nor expense in erecting a comfortable, convenient, and tasteful residence.”

In 1845 P.T. Barnum purchased seventeen acres of land on the western side of Bridgeport and spent the next three years overseeing Iranistan’s construction. 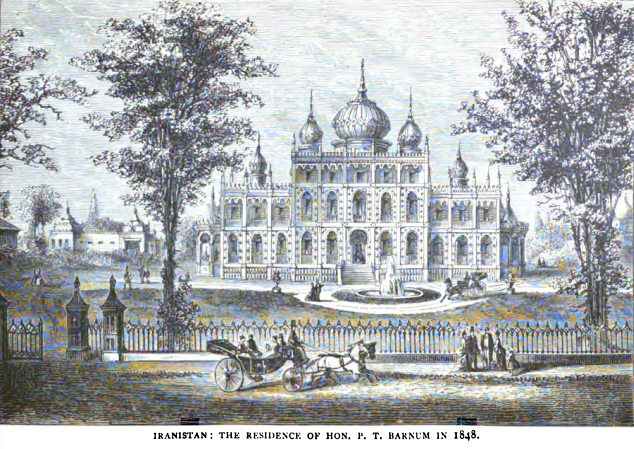 P.T. Barnum moved into Iranistan on November 14, 1848. Nearly a thousand fellow-citizens of Bridgeport, rich and poor alike, came to the housewarming. He called the estate Iranistan, meaning “a Persian home”, in reference to its Oriental appearance.

Mr. Barnum spent the next two years at Iranistan with his family, though he paid frequent visits to his various places of business and amusement; business for him, amusement for the world.

“Elegant and appropriate furniture was made expressly for every room in the house. I erected expensive water-works to supply the premises. The stables, conservatories and outbuildings were perfect in their kind. There was a profusion of trees set out on the grounds. The whole was built and established literally ‘regardless of expense,’ for I had no desire even to ascertain the entire cost.'” 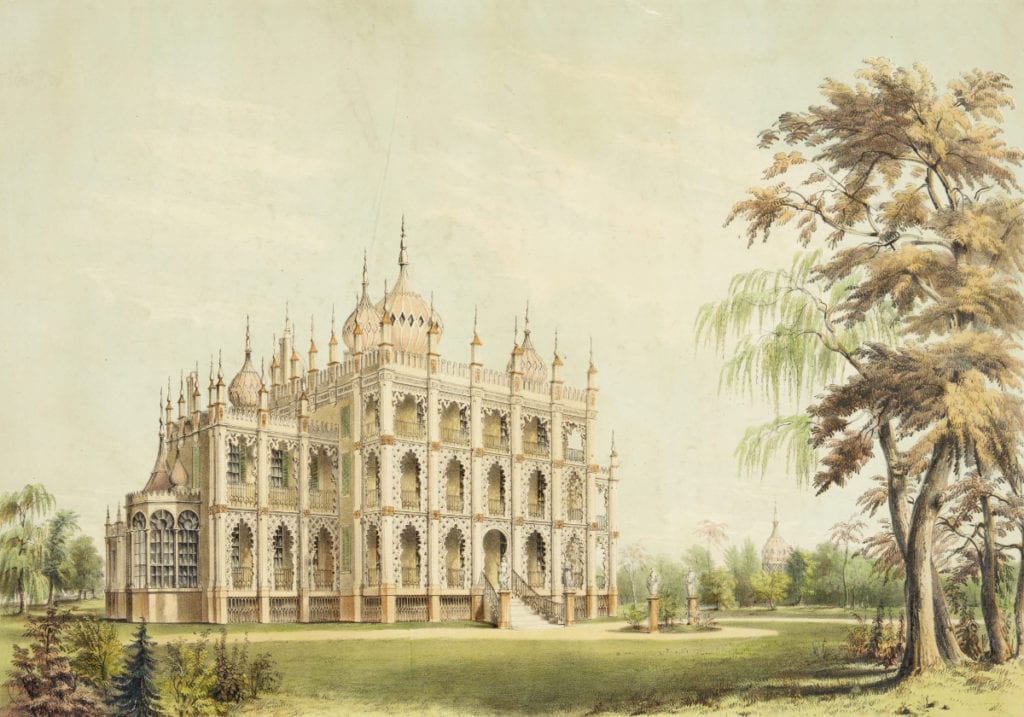 Jenny Lind, a famous Swedish opera singer, one of the most highly regarded singers of the 19th century, undertook an extraordinarily popular concert tour of America beginning in 1850, guided by P.T. Barnum. On her return from Boston to New York, her entire party stayed at Iranistan. The first morning she was there Miss Lind was given a tour of the grounds, the beauty of which delighted her.

“Do you know, Mr. Barnum,” she said, “that if you had not built Iranistan, I should never have come to America for you?”

Mr. Barnum, much surprised, asked her to explain.

“I had received several applications to visit the United States”, she continued, “but I did not much like the appearance of the applicants, nor did I relish the idea of crossing 3,000 miles of ocean; so I declined them all. But the first letter which Mr. Wilton, your agent, addressed me, was written upon a sheet headed with a beautiful engraving of Iranistan. It attracted my attention.

I said to myself, a gentleman who has been so successful in his business as to be able to build and reside in such a palace cannot be a mere ‘adventurer’. So I wrote to your agent, and consented to an interview, which I should have declined, if I had not seen the picture of Iranistan.”

“That, then, fully pays for me building it,” replied Barnum. Sol Smith Russell, a famous comedic stage actor, also praised Iranistan in a letter to Barnum,

“I honor you, oh! Great Impresario, as the most successful manager in America or any other country. Democrat, as you are, you can give a practical lesson to the aristocrats of Europe how to live. At your beautiful and tasteful residence, ‘Iranistan” (I don’t like the name, though), you can and do entertain your friends with a warmth of hospitality, only equaled by that of the great landed proprietors of the old country, or of our own ‘sunny South.” 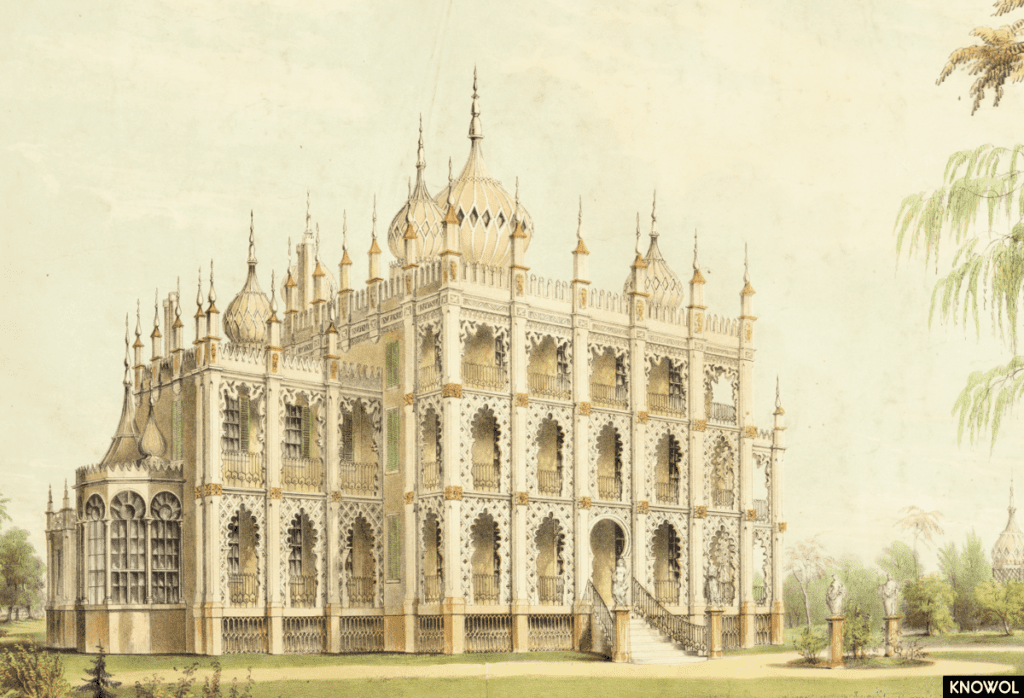 In the fall of 1852, on the afternoon of his daughters wedding, P.T. Barnum went to Bridgeport to get shaved for the occasion. While he was lying in the barber’s chair, half of his face shaved and the other half covered with lather, his prospective son-in-law, David W. Thompson, drove up to the door of the shop and rushed in, exclaiming excitedly, “Mr. Barnum, Iranistan is in flames!”

Barnum jumped up from the chair and, half shaved and with the lather still on his face, jumped into the wagon and started for him with the horse on a run.


“I was greatly alarmed,” he said afterward, “for the house was full of visitors who had come from a distance to attend the wedding, and all the costly presents, dresses, refreshments, and everything prepared for a marriage celebration to which nearly a thousand guests had been invited, were already in my house. Mr. Thompson told me he had seen the flames bursting from the roof, and it seemed to me that there was little hope of saving the building.

“My mind was distressed, not so much at the great pecuniary loss which the destruction of Iranistan would involve, as at the possibility that some of my family or visitors would be killed or seriously injured in attempting to save something from the fire. Then I thought of the sore disappointment this calamity would cause to the young couple, as well as to those who were invited to the wedding. I saw that Mr. Thompson looked pale and axnious.

“‘Never mind! said I; ‘we can’t help these things; the house will probably be burned; but if no one is killed or injured, you shall be married tonight, if we are obliged to perform the ceremony in the coach-house.'” “On our way, we overtook a fire company, and I implored them to ‘hurry up their machine.’


Arriving in sight of Iranistan, we saw huge volumes of smoke rolling out from the roof and many men on the top of the house were passing buckets of water to pour on the fire.

Fortunately, several men had been engaged during the day in repairing the roof, and their ladders were against the house. By these means and with the assistance of the men employed upon my grounds, water was passed very rapidly, and the flames were soon subdued without serious damage.

The visitors of Iranistan were thoroughly frightened; Catherine Hayes and other visitors, packed their trunks and had them carried out on the lawn; and the house came as near destruction as it well could and escape.”

Iranistan was badly damaged but not completely destroyed, and Barnum decided to rebuild. It was during this rebuilding that Iranistan would meet its final fate.


The Lost Palace of Iranistan 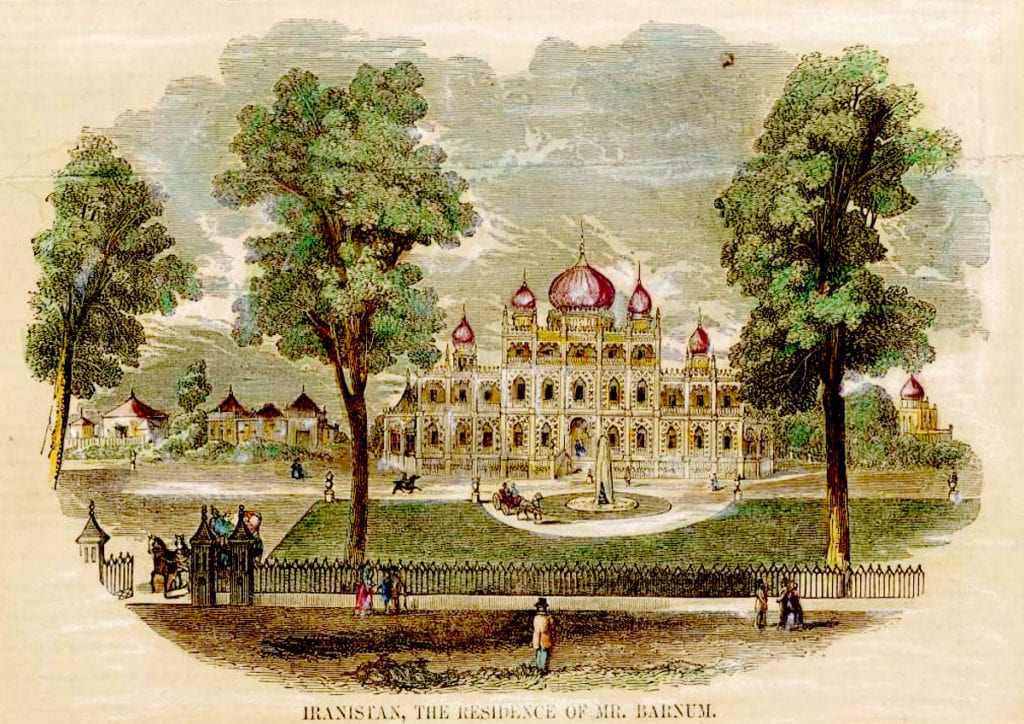 In all probability, one of these lighted pipes was left on a cushion covering the circular seat in the dome and ignited the flax straw with which the cushion was stuffed. It may have been days and even weeks before this smoldering tow fire burst into flames.

The workmen were specifically instructed not to smoke there, but it was later discovered that some of the men were in the habit of going into the main dome to eat their dinners, and stayed there awhile after dinner to smoke their pipes.

Despite Iranistan burning to the ground, P.T. Barnum remained in Bridgeport. In 1860 he built another house, next to that of his daughter Caroline, not far from the ruins of Iranistan. 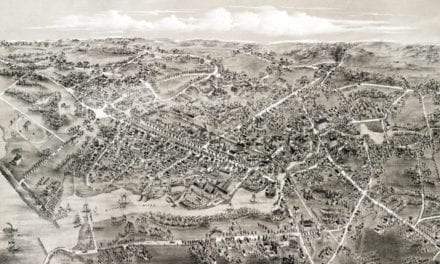 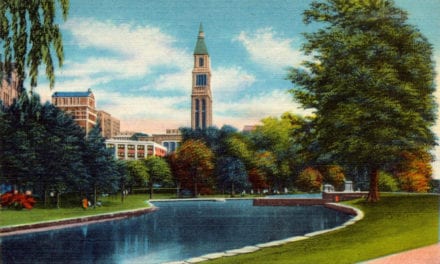 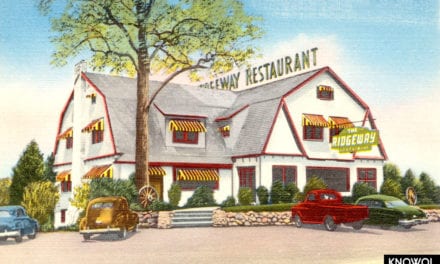 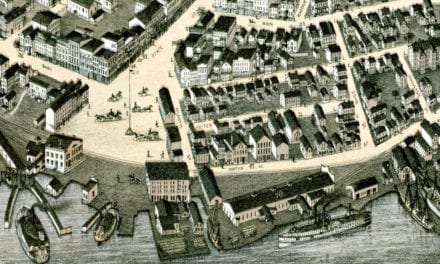